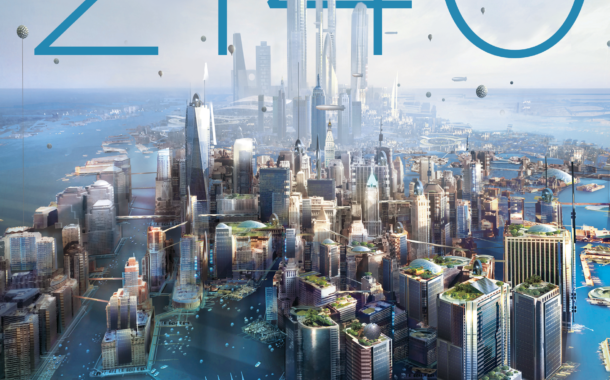 New York 2140 is not a very good book. Let me get that out-of-the-way right up front.

I’m always really torn with this author. I have read many interviews with Kim Stanley Robinson (KSR) and have listened to a slew of podcasts of interviews with him and he is clearly a brilliant and well educated man with

excellent ethics that mirror my own. However, that doesn’t always translate into his books. I really enjoyed Aurora but then that Science in the Capital City trilogy was pretty awful.

My ambivalence about Kim Stanley Robinson extends to New York 2140. In some sense this is a pretty good philosophical discussion on our times now. Right now. What I mean is that the book really doesn’t make sense as a speculative fiction or sci-fi or cli-fi work. Despite the fact that New York City is flooded, there really is no difference between our times and the times in this book.

KSR’s world may be more than 100 years in the future but it’s firmly rooted in the early 2000s. All the references make you feel as if – despite the floods and the passing years – nothing has really changed. All the cultural and political references are basically 2015 and before. It is as if other than the flooding, nothing has happened between 2017 and 2140. Same governmental structures, same basic economy, same references, same economic divisions. You don’t get the sense that anything has really changed. And maybe he does that on purpose but it makes for an unconvincing future. It’s hard to believe after over 100 years and dramatic environmental changes that there wouldn’t be a very different system than we have now. Or if the system wouldn’t be different at least SOMETHING would be. This story feels more like it is just 10 or 15 years in the future or not over 100.

As usual in KSR’s books the characters here are one-dimensional, forced and completely uninteresting. Except for Vlade, The building supervisor, there wasn’t any character that I felt I could connect with or that was believable. The police officer had the potential to be an extremely compelling character but she appeared so randomly and rarely in the book and was such a cardboard cut-out that it was hard to grasp her and to engage with her story. I especially had a hard time with Stefan and Roberto, too young Huck Finn-type water rats who are always getting into trouble. They are supposedly 12 years old but they speak as if they are in their 30s and are highly unconvincing as characters. The search for Herman Melville’s home also just doesn’t make any sense in the plot except to give these kids something to do. Likewise, many things that happen in this book such as when the kids find the old English treasure ship or when the two computers guys (Mutt and Jeff….give me a break) are rescued from the underwater jail are simply too easy and to breezy. They are uninteresting and much too fast. Sure… Two kids find and treasure ship and get a dredge to dig it up in the middle of the city without anyone noticing… Oh boy…

Other than plot devices to just drive the story forward these simplistic adventures don’t serve anything and ring hollow. It all feels very ham-handed.

It isn’t all bad. There’s a lot of good imagination here and over all it’s a well-conceived world. I found it was excellent in certain areas such as when the old man describes when NYC went under or the airship cities Amelia sees. I also very much appreciate KSR’s values and how he envisions an economy that works for all levels of society. I really liked a lot of the economic discussion and the direction he posits we should take now.  I enjoyed the character of Amelia with the airship flying around to save the charismatic megafauna that remains. It is pretty damn entertaining. Ridiculous. But very fun. That said, she played pretty much no part in the plot. Her purpose was only to give the reader a view of what is happening outside of New York City. All of it is interesting and rather well conceived imagination-wise but completely irrelevant to the story. Like Amelia, Mutt and Jeff don’t really seem to play a part in this book.I also enjoyed out he plays with phrases like “thinking they are great gestalters” or “I pikketied the US tax code”. Very good.

The real character of this book and honestly the only attractive character of this book is the city itself. Imagining a flooded New York City and how people might live there is the best part of Robinson’s work. The characters themselves are almost besides the point. Likewise, there is no real villain in the book just people with varied motivations. If there is a villain here it is capitalism.

In fact, New York 2140 could be half the size. At over 600 pages it’s quite a slog. And much of what is in here is irrelevant or unnecessary. It doesn’t add to the story and actually detracts. Often times, there are descriptions of things that have nothing to do with the story and I think or perhaps only there to allow the author to show off his knowledge about the city. Again, with the city being the main attraction of the book this is fine but there is this whole other plot out there that gets dropped again and again.

KSR always has a problem with silly and un-artistic dialogue that’s brain dead to read and yet there is some simplistic learning in hidden in there. That’s true in all his books. The dialogue can drone on and on and it is “in-elegant”. Unreal. Not convincing. It feels as if he’s putting words into the characters mouth that they wouldn’t actually say. He is totally inelegant in how he tells his story. It’s base. For me it doesn’t work as art. But maybe…who cares? Does that matter? To me it matters because art serves a function. Written art has the ability to impact the way we think through the story. In New York 2140 the art feels lazy and so it doesn’t work.

Yet Robinson’s book is a challenge to us. He wants us to THINK differently and despite my feeling that it fails as art, it does succeed as a thought challenge. Robinson asks us to look beyond our current economic structure and envision a process that might work better. I just dont think it took 600+ painful pages for us to get there.

Overall this is a pretty difficult to swallow book. Not one of his best works and not one that I would recommend to anyone.

View all my reviews on GoodReads

Published! Chaos of Hard Clay – An Anthology of Post-Apocalyptic Fiction

Chaos of Hard Clay is Published! Somewhere within the fits of reason that assailed her,…