Houston. We knew this was coming. We knew years ago that this exact scenario was going to roll out over Houston. We knew it was coming and we did nothing. Absolutely nothing. Over the past few years there have been literally dozens of newspaper articles, magazine articles, online publications and scientific studies pointing out exactly how this disaster would play out, why and what we would need to do to avoid it. And it made no difference what-so-ever. Sadly, willful ignorance seems to be a hallmark of our nation.

Scientists who study climate, weather, the ocean and the atmosphere day-in and day-out are making the following points about Hurricane Harvey:

So while climate change certainly did not cause Hurricane Harvey, climate change made Harvey much worse than it would have been otherwise. Get used to it. 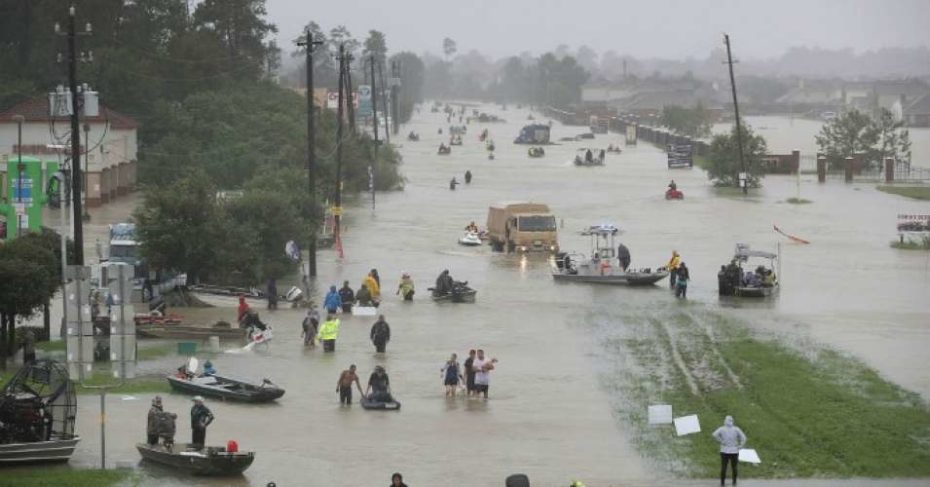 Lack of Government Regulation and Zoning Made Hurricane Harvey Worse

But it wasn’t just climate change. This was also a disaster of planning and zoning. Back in the late 1990s when I was working on my Master’s degree in Community and Regional Planning at the University of New Mexico, Houston was consistently one of the cities held up as an example of disastrous planning that would one day lead to disaster.

Texas is famously anti-regulation, anti-zoning and anti-community and regional planning. Over the past few decades, local officials and elected officials in Houston have turned their noses up at things like building regulations and limits on building in flood plains, among others. The result is that nearly 200,000 acres of wet prairie land that once served as a giant sponge, soaking up rainfall has been paved over exacerbating flooding throughout the region.  One study pointed out that over the last forty years, rainfall in the Brays Bayou watershed had increased 26 percent, but “runoff has skyrocketed by 204 percent.”

And, of course, as we see all the time minority and impoverished communities get hit the hardest.

Pro-Publica did an extensive story on Houston’s planning disaster last year that is well worth your time.

While Houston has been on this uncontrolled, unmanaged growth rocket, they haven’t invested in the infrastructure that keeps people safe and moving, keeps the economy rolling and builds in resilience to weather extremes.

The two ageing reservoirs in the city that are currently in danger of collapsing haven’t been upgraded in decades and while some money has been put forth, it is precious little to deal with the problem. Houston is simply not spending the money it needs to spend to just do the up-keep on what they have. They literally can’t handle what is happening.

There has been a ton of criticism of the Mayor of Houston for not evacuating the city before the storm arrived. But remember that while the population of Houston has skyrocketed the past twenty years the roads and transportation systems have not grown to keep pace. Nobody wants to spend the money. The result is that you simply can’t logistically evacuate the city on short notice. It isn’t possible. Remember that the largest death toll from Hurricane Rita in 2005 came has people died of heat as they waited on the highways out of Houston during the evacuation. Now imagine that kind of backup as several feet of water inundate the highway. Thousands would have drowned. Faced with two seriously crappy choices, the Mayor of Houston probably made the right choice.

Sadly, there is this attitude controlling Washington and many state capitols that tells us that we can’t spend money on the things that build a nation: education, transportation and so on. It seems like the only thing we have money for is war. We still we aren’t serious about fixing our nation’s infrastructure. And if we don’t invest in it our national will literally crumble from within. The President’s talk of a “public-private” partnership to do massive infrastructure projects around the nation has been rightfully criticized as just a tax-payer giveaway to big business. So it isn’t a seriously proposal at a time when we need serious proposals.

Once the flood waters recede, life won’t suddenly go back to normal for the people along the Gulf coast:

In the coming weeks and even months, residents of Houston and other parts of southern Texas hit hard by Hurricane Harvey will be faced with the public health disasters that can result from dirty floodwater and landslides. The natural disaster has ostensibly turned the city into a sprawling, pathogen-infested swamp.

And many Texans, thanks in part to their Republican-dominated state legislature don’t have health insurance or decent enough health insurance to deal with both the mental and physical problems they will face in the coming months. So on top of a flood disaster Houston’s citizens will be faced with humanitarian and financial disasters.

Add to that the financial mess of a city where 80% of its citizens simply don’t have flood insurance. Many of them simply can’t afford and have been faced with the choice the past few years of paying for insurance or buying food for their children. Meanwhile the Republicans running the state have made it much more difficult for Texans who have bought insurance to actually use it.

I wont dive into it too deeply here but lets keep in mind that tens of thousands of people will be displaced by this storm. Climate refugees. We need to seriously begin the discussion right now about how we plan for what will be in the future millions of people on the move from climate disruption. Instead of using migration and immigration as a fear tactic to further divide us, we need to develop an immigration system that is humane and takes into account the changes that are well on their way.

At this point we are tired of hearing the refrain that we can’t talk about how to prevent disasters. A guy goes into a school and kills a bunch of kids but somehow, we are told, that it isn’t the right time to talk about keeping guns out of the hands of certain individuals. A major American city drowns but somehow, we are told, that this isn’t the right time to talk about how we keep our families and neighbors safe from climate change, poor planning and a lack of infrastructure investment. Enough of that. NOW is exactly the time we need to talk about these things.

In order to prevent or at least lessen the impact of future disasters we simply MUST talk about the climate, planning and infrastructure context of Hurricane Harvey. Climate change in particular demands that we rethink everything we’ve known and move forward on radical change – both mitigation and adaptation. It is time to build in resiliency.

Philosopher Timothy Morton says that climate change is a “Hyperobject” – a thing so big it impacts everything no matter if we are aware of it or not. We don’t have to understand the thing for it to be true. A Hyperobject is not a function of our knowledge. Nature is a Hyperobject for example.

Morton, who lives in Houston, also labels Houston a Hyperobject in and of itself. At the same time that city is a part of the Hyperobject that is global warming, what with its proximity to the Gulf, it being a home base for so much of the oil and gas industry, the lack of quality infrastructure and the uncontrolled sprawl that all contributed to make this disaster worse than it needed to be.

It is a moment of blinking self-awareness.

What Impact Could Artificial Intelligence Have on Climate Change?