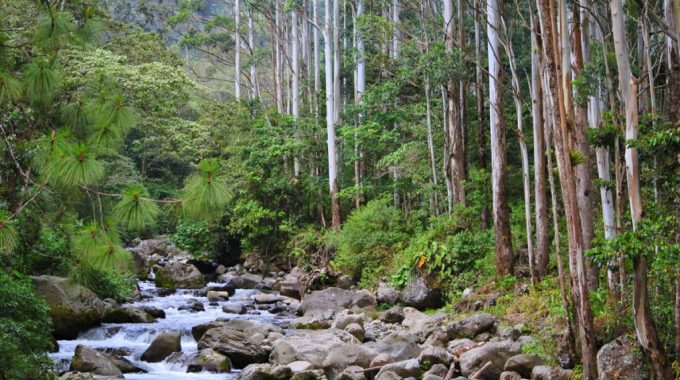 In January 2013 I spent several days hiking the cloud forest trails of the Chiriquí highlands with a Panamanian friend. Deep in one of the national forest a group of Ngäbe-Buglé children found us sitting on a log. They didn’t speak Spanish and desperately wanted to fill our hands with flowers they had picked.  Their parents came along, said hello and continued into the trees and ferns.  Later, we came on their home, cut from the forest and in an ever-growing process of cutting down trees and exposing the delicate tropical soils to erosion. The river ran milky below their land.

If you would attempt to paint a picture of the deforestation challenges facing Panama you would come up with a tumultuous work of ever-shifting abstract art. On the one hand there is the good news. With over 43% of the nation’s forest cover still intact Panama has one of the highest percentages of unbroken forest in the region. On top of that, deforestation has actually trended downward since 2001 with an annual loss rate of 0.4% or 13,500 hectares (33,400 acres).  That is a pretty dramatic drop since the dark days of the 1980s and 90s when cutting and burning hammered nearly 50,000 hectares (124,000 acres) a year. Most recently a study by the US National Academy of Sciences found that from 2001-2010 forest cover actually increased by 3,100 hectares (7,600 acres). While all of this gain is in secondary forests and plantations it is a strong indication that Panama may have turned a land management corner.

Then there is the…on the other hand.  Open that and you find that Panama still has a big problem. Road construction, logging, gold mining, dam-building and colonization (which results in the clearing of forests for agriculture, pastures and firewood collection) are growing trends that lead to significant deforestation and ecosystem degradation. Illegal logging has increased over the last ten years and a highway proposed for the Darien Gap threatens to open up to logging and colonization one of the riches ecosystems on the planet. While secondary forests are indeed growing the most biologically-rich mature old growth stands are still seeing major losses. On top of it all, the lands hardest hit by deforestation in the past have seen massive soil erosion, most of which has ended up in the Panama Canal, threatening to impact Panama’s main source of income.

Panama is a world leader when it comes to the recognition of the territorial rights of indigenous peoples. The Panamanian Constitution actually guarantees the indigenous communities of Panama “the reservation of necessary lands and collective property of the same to achieve their social and economic well-being.” Seven ethnic groups, the Guna,  Ngäbe, Buglé, Naso-Tjêrdi, Bribri, Emberá and Wounaan, making up five percent of the national population control most of Panama’s rain forests. Nearly 60% in fact.

Over the past two decades these groups, governed by internal democratic institutions, have made significant strides in territorial rights and have largely proven to be effective forest managers. In 2010 Panama passed a law allowing indigenous groups to claim collective lands. The law lays out a detailed step-by-step process by which the claims are made. The Wounaan of eastern Panama and the Darien Gap, assisted by the US-based Rainforest Foundation, were the first to work through the process gaining title to their lands last year. The ownership of the forested lands by indigenous groups is key in the move to protect these ecosystems. By using collective property management, traditional institutions and system of administration based on a world-view less inclined to exploit all available resources for short-term gain forests within indigenous lands have seen a much higher percentage of concentration has opposed to those in private control.

None of this is to say that we are seeing an imminent solution to deforestation in Panama. Indigenous lands are subject to many of the same pressures seen throughout the nation. For example, the Ngäbe-Buglé Comarca where I hiked is actually seeing an increase in deforestation as non-indigenous colonists move into their land; members of the group operate outside the sanctioned management structure and mega-projects such as the Cerro Colorado mine and the Barro Blanco Dam project move forward.

Just recently the National Coordinator of Indigenous Peoples in Panama (COONAPIP) withdrew from the United Nations Reducing Emissions from Deforestation and Degradation (REDD) program alleging that the UN and the Panamanian government “have appeared to marginalize the collective participation of the 7 indigenous peoples and 12 traditional structures that make up COONAPIP…putting legal and administrative obstacles in the way.” The UN REDD program is intended to reduce emissions of carbon from developing nations through the protection of their forests.  The program was dealt a significant credibility blow world-wide by the exit of the Panamanian indigenous groups.

In an effort to safeguard the canal, the Panamanian government has moved to protect what remains of the regional watershed. It has also launched a reforestation drive for damaged lands. The US government committed to reduce Panama’s debt and give $11 million for tropical forest conservation over 12 years. Several large protected areas are seeing an increased amount of popular support as eco-tourism grows rapidly.  While this is all positive, much more has to be done.