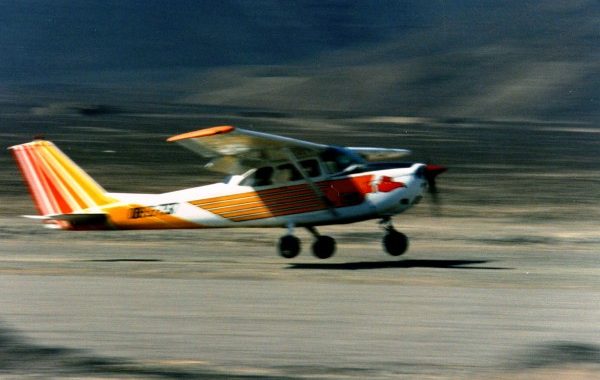 To be honest, I’m not even sure if I’ve ever actually seen the Nazca lines.  Yes, I have about one-hundred photographs of them in my computer, taken with my own camera.  I have the copy of my ticket for the plane.  I have a picture of the plane – and the pilot.  I have a picture of me with the plane and the pilot. But all I remember is the back of my eyelids and the thought that…I can’t wait until this is over.

See, the main problem I have with Pisco Sours is that you can drink ten of them and not feel a thing.  Then you stand up and, suddenly, three days of your life go missing.  Here is how you make a Pisco Sour:

Blend ice, eight parts Pisco (a liqueur distilled from grapes), four parts lime, three part simple syrup, and one egg white. Strain it into a glass, spread some bitters on top of the sour foam. Simple.

I’m not sure when it was but I woke up, briefly, in a hotel room. My bus ticket to Nazca was on the floor. Everything in the room was bathed in green from the light streaming through the turquoise curtains that covered the windows facing the mountains.  It was a fancy, high-end hotel room in Lima – and it wasn’t mine.  And I wasn’t alone.  And she didn’t speak English. Or Spanish.

The next thing I knew I was in the bus.

My pockets were stuffed with small oranges, a large water bottle was in my coat pocket and I held a plastic bag tightly in my hand. A young Peruvian mother and her son sat next to me.  She clicked her tongue and shook her head – clearly disgusted.  A man in the seat behind me laughed and said he didn’t know that Americans could stink so badly. I quickly checked my pockets to find that all of my money, my passport and the information for my flight over the Nazca lines were all right where I had put them.  Clearly, someone had taken pity on my young, drunken archaeologist self.  Everything was in order except my brain – and my belly.  I was sure my liver would never recover. I put my head against the window and stared at the stain on the back of the seat in front of me. The clouds were low. The landscape gray.

The Nazca lines as most of you know, are giant geoglyphs spread across the arid Nazca plateau between Nazca and Palpa. The lines themselves were created sometime between 400 and 650AD and are comprised of everything from straight lines to geometric shapes to stylized depictions of spiders, monkeys, orcas, lizards and, of course, the famous hummingbirds. The largest of the figures are nearly 700 feet across.  Some of the lines stretch for tens of miles.

And no, they were not made by or for aliens.

And no, I don’t buy Woodman’s hot-air balloon theory either – although I won’t discount it as impossible. Astrological or cosmological reasons make the most sense to me. Geoglyphs in the Andean deserts are not a rarity as I noted here. The purpose of the lines – the reason they were constructed – has been debated since they were first seen from the air in the 1920s. Did they point to water sources?  Were they meant to be seen by the gods?  Did they point to specific places on the horizon where certain stars or constellations rose or set at important times of the year?

They were built (or drawn) by removing the reddish rocks that dominate the plateau and exposing the nearly white ground the lies underneath. At most, they are 30cm deep.  Most are about 10cm. Clearly, such immense work required major planning and coordination by the Nazca and Paracas people.  Its impressive stuff – and fragile it seems to me.

The pilot, a young man with a large moustache and a red, v-neck sweater, took one look at me, handed me a dozen plastic bags and said, in English: “oh, this should be a treat.” He operated from a squat, square building sitting out in the rocky plain. The building was a crisp, clean white. The runway unpaved.

I knew what I wanted photographically.  I wanted a bunch of black and white shots that were high

contrast and maybe, in places, a little over-exposed.  I wanted my shots to look like the mysterious pictures I had seen in Von Däniken’ book when I was kid. I wanted something completely opposite to the serious science and archaeology I had taken on. I wanted mystery. I wanted creepy. I popped some old black and white film into an even older Pentax and stuck the camera out the window.  I didn’t even look.  I didn’t even focus.  I had no interest in vomiting again. I just snapped away, reloaded by touch and snapped away some more.  When the pilot told me to look, I asked which side and stuck my camera out the window.  I remember the cold chill on my hand. I remember the spinning in my stomach.  I remember the backs of my eyelids.

Of course, Von Däniken was a nutjob but Chariots of the Gods? was inspirational to a small boy who wanted to go places. However, when Carl Sagan insisted: “extraordinary claims require extraordinary evidence”, I got the point. So, Maria Reiche was even more inspirational because she was, at least, from this planet. I had actually been fortunate enough to meet her at a lecture in the summer of 1987. After that, I knew I had to see the lines.

Soon I had had enough.  I’m not sure how long the flight lasted but it seems like hours. Days. I had exhausted all my black and white film.  I’m sure the pilot was getting an extra chuckle by making a few extra turns over the lines. I emptied my stomach the second my feet hit the ground. The world turned. I walked into a waiting taxi. Then I got inside.

Two days later I woke, alone and very, very cold in a small Nazca hotel room. My stomach ached for food. My mouth was like a cotton gin. I dressed and went down to the street and had a Pisco Sour. Just one.

I haven’t had one since.