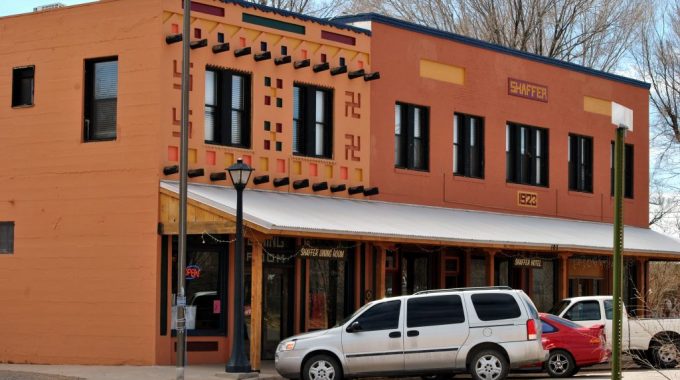 One week ago, a slightly macho man and his two slightly pre-teen daughters requested the scariest two rooms in the hotel. Rooms 17 and 18 are right next to one another.  A tiled, modernistic bathroom links the rooms.

The bathroom was also where the cowboy was found hanged.  Had he done it himself or had he been done in? That was never solved.  Pop disposed of the body sometime in 1928.

The the middle of the night, the father woke up to pee. The cowboy’s ghost got him in the bathroom. First it pushed him against the wall.  Then it enveloped him in frigid air. The man’s screames woke the girls.  The ghost released him and, leaving the bathroom, entered the man’s room while the three watched the sheets on the bed sink as the ghost sat then laid back upon the bed.

Alma found them shivering in the ballroom at 4am. Her toothless smile was enchanting as she related the story.

“This is me,” she radiated. The Shaffer hotel sat as an empety hulk for years before she took over.  “It was meant to be.”  Apparently so.  Her own home in Willard burned to the ground a week after she bought the hotel. There was no going back.

Mountainair, New Mexico is located about seventy-five miles south of Albuquerque in the remote Estancia Valley out  where the short-grass prarie meets the mountains. It used to be a thriving town in delicate relationship to the desert.  Its the kind of place that used to  have sidewalks. Its also the kind of place that had the Rosebud – which liberally served me liqour as an underage archaeology student. Mountainair grew, watered by the railroad but then the world left it behind.  It used to be a good thing to be at a cross-roads.  Now the Estancia is a largely empety mix of pinyon and juniper and grasses, single-wides and religious radio.

Pop Shaffer came to Mountainair in 1908. He built his place in 1923.  Sick to death of wooden buildings that burned down, Pop went all out and built the hotel of cast conctrete and decorated it by hand in a south-western-art-deco style all his own. Alma’s restoration work is returning it to style. Pop was a real go-getter.

He ran a blacksmith’s shop, an auto garage, a theater…he stored grain and beans ready for shipment in his specially-built rooms within the hotel.   His “possessed” son was really just a talented artist and his jilted wife a bad shot. There is a bullet hole in the ceiling of the lobby and a giant hole near the door where Pop’s lover fired back with a bison gun.

Alma’s “cowboy rooms” run just $30 a night. “Cowboy” means one long, thin bed with the toilet down the hall. Doubles run $40 and the honeymoon suites around $100. Authentic?  Yes, its authentic.  Ghosts included.

I first met Alma in the hotel restaurant while downing delicious fresh-made tacos. She thought I was a ghost hunter because I had an iphone. “Kind of,” I told her “But I prefer the term archaeologist.”

“A man came here just last week from the University of New Mexico. A researcher. He had this little device like a radar.  Kind of like that thing but bigger,” she said pointing at the iphone. “It was for detecting paranormal activity. Ghosts.”