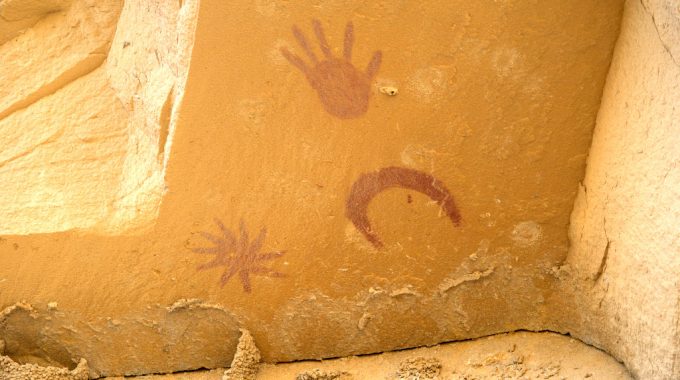 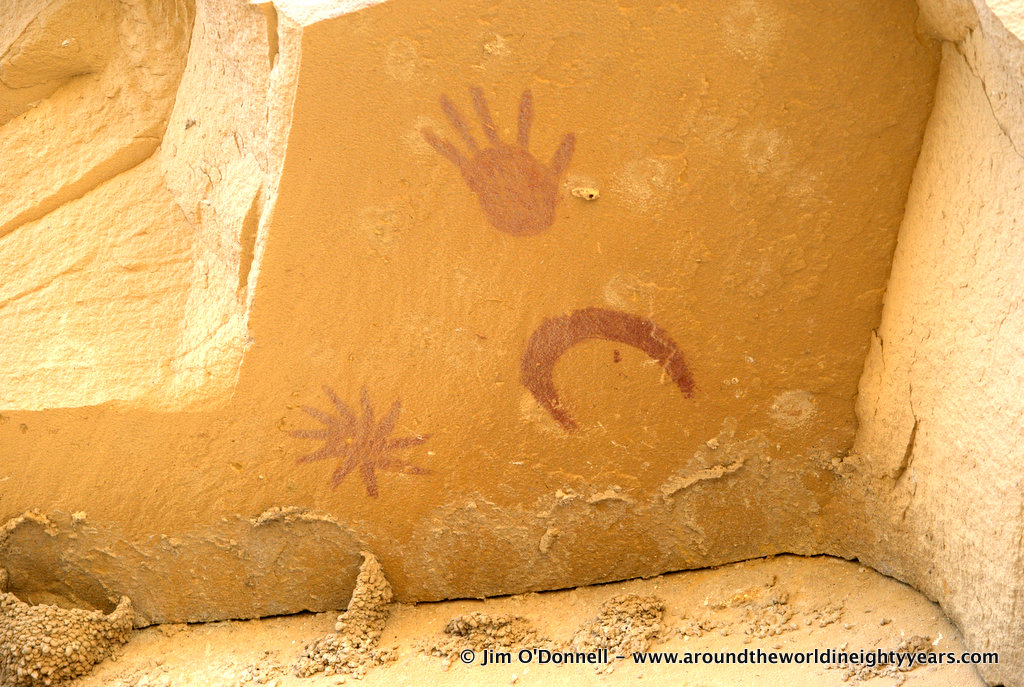 There really isn’t any elevation change but the four miles to get to the “ Supernova of 1054 ” petroglyph takes you across an open valley bottom of soft sand held in place by rather hard-done-by Four-wing saltbush, sagebrush and cactus.  There is some tough grasses out there too, but not much. I say “kind of” because when the wind picks up that sand and dust won’t grip onto anything very well and it swirls into the air in some pretty impressive, if localized, sandstorms.

To the right is a 100-foot tall sandstone cliff laid down in the Late Cretaceous when the valley was in a shallow area of a great inland sea. The sandstone is pocked with ammonites and ancient shrimp burrows and even shark teeth. It’s also painted and carved in wild ancient petroglyphs of animals and beings that no longer exist – or never did.

In the winter the hike is bitter cold. In the summer it’s ridiculously hot. In the spring the wind howls and you’ll rarely see anyone else out there. Two weeks ago when I went back to the Supernova of 1054 petroglyph for the first time in several years, I was all alone.  Me…and the wind.

The point is that, by the time you get down the valley, across the dry wash and up under the shade of the sandstone cliff topped with Penasco Blanco you feel like you’ve gone on some extended, rough and satisfying expedition into the middle of nowhere.

And there, tucked up underneath the cliff about five meters up and among a city of swallow nests hangs the petroglyph that MIGHT represent the Supernova of 1054.

Around Midsummer in the year 1054 AD a star located out near Zeta Tauri exploded. Well, actually, it must have

exploded thousands of years before that date but it was on July 4th of that year that the light from the blow out made it the 6,500 light years to our section of the universe. The people on Earth could first see the bright spot in the sky that was the pulsar and nebula formed from the material blasted out of the exploding star. This supernova is classified as SN1054.

The light in the sky was so bright it could be seen even in the middle of the day for nearly a month. Some researchers speculate that the “star” created by the supernova of 1054 was six to ten times brighter than Venus. This new star in the ancient sky lasted for nearly three years before it began to fade out. Because it was so bright and easy to see, the event was recorded by Chinese, Arab, Japanese, European and quite possibly Native American observers.  Quite possibly – probably – the people at Chaco.

The panel has three symbols: a large star, a crescent moon, and a handprint. Along the bottom of the cliff are three concentric circles (or maybe it is the sun) painted in a now-faded yellow on red background. About a foot in diameter, the circles have what might be red flames trailing off to the right but it is hard to see and even harder to photograph.

The reason some researchers think that this petroglyph describes the supernova of 1054 is not only fascinating but actually quite convincing.  See, the moon makes a regular 18.5-year transit back and forth across the sky and so every 18.5 years the moon and the Earth are more or less in the same relationship as they were in July of 1054. It just so happens that on that date when the moon and the Earth are back in that same position, the moon faces the Crab Nebula just as it does in the photo of the rock art up top.

Computer models and simulations of the moon’s orbit in early July 1054:

“….have shown that the moon was waning, just entering first quarter. These calculations also indicate that at dawn on 5 July 1054 in the American Southwest, the moon was within 3 degrees of the supernova, and its crescent oriented as on the pictograph (provided the pictograph is viewed looking up with one’s back to the cliff, as the authors of the pictograph most likely did). With the apparent width of the moon being about half a degree, this pictograph comes basically as close as it possibly could to being a true scale rendition of the 1054 supernova seen in conjunction with the waning moon.”

Correlation is not conclusion mind you but I for one find it pretty compelling.

There are two other possible ancient paintings of the Supernova of 1054 in Arizona. In both, the moon is a crescent, just as it is in the Chaco painting, next to a circle that might represent a star. Finally, a Mimbres ceramic bowl from southwestern New Mexico is also thought to show the supernova.

The question has to be asked: Could this petroglyph represent something entirely different? Could this petroglyph actually represent the 1006 supernova also recorded by Chinese astronomers or possibly the 1066 passing of Halley’s Comet that was seen all over the world? Several researchers who doubt that the petroglyph in Chaco represents the Supernova of 1054 ask why, if they recorded that event didn’t they record other spectacular astronomical events.

The easy answer to that is that we may just not have found them yet.

Remember, 1054 was at the time that the city (and empire) that was Chaco was at its height. Chaco was an important and possibly rather powerful Mesoamerican urban center of which the palaces remain for us to visit today. Scarlet and Military macaws squawked at Pueblo Bonito and the elites sipped at ceremonial chocolate.

The population was relatively high and specialists made detailed astronomical observations.  They didn’t miss much and they surely didnt miss the Supernova of 1054.

There is nothing quite like nights in Chaco. As soon as the sun goes down the air goes frigid. Nights are chilly, even in the summer. But the spread of stars over the unlit and remote canyon is something spectacular and rarely seen by most modern people. Because of this gift, Chaco is designated as an International Dark Sky Park to preserve that experience of truly dark night sky:

“The park’s natural nighttime darkness, commitment to reducing light pollution, and ongoing public outreach have led to its certification as an International Dark Sky Park by the International Dark-Sky Association (IDA). Chaco is the fourth unit in the National Park System to earn this distinction. By receiving this designation at the Gold-tier level, Chaco rates as one of the best places in the country to experience and enjoy natural darkness.”

Laying in my sleeping bags at night with only my face peeking out, the Milky Way spread out from horizon to horizon and everything in the universe seemed like it was right there in front of me.