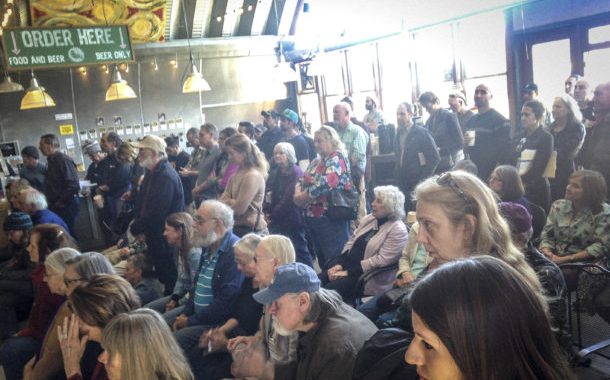 On a weekday morning at 11am about 400 people gathered at the Taos Mesa Brewing Company in Taos, New Mexico to support public lands.

“The National Monument is one of the best deals ever made,” said the Taos Pueblo War Chief, Curtis Sandoval. “Not just for us Native Americans but for anyone who enjoys freedom.”

Public lands are under attack. Despite the fact that the American people overwhelmingly support public lands, the Republican Party has long lead an effort to transfer public lands to state ownership or to corporations. This isn’t new. Republicans have been doing this for nearly 100 years. In 2015 nearly 60 bills were introduced in state legislatures with the goal of taking public lands away from the public. They were all defeated by a huge outpouring of opposition from the American people. But the GOP didn’t give up. In 2016 Republicans in both state legislatures and Congress introduced bills to undermine the ability of agencies like the Forest Service, the Bureau of Land Management and the Fish and Wildlife Service to manage these lands. This kind of extremism is what eventually lead to the standoff with the Bundy’s in Nevada a few years ago and then the standoff at the Malheur National Wildlife Refuge a year ago.

This year, Republicans are looking to get rid of the Antiquities Act, end funding for conservation programs that go to communities all over the country, dump the Endangered Species Act, terminate the Environmental Protection Agency, open our forests and watersheds to development and give away public lands to states so that they can be sold off to oil and gas, mining and logging company. At the state level, Republicans are introducing bills right and left that will harm public lands.

Americans aren’t very happy about this and public lands action events are popping up all over the West.

The 400 people that gathered in Taos on February 21, 2017 included the Mayor of the Town of Taos, the Mayor of Red River, the Mayor of Taos Ski Valley, county commissioners, veterans groups and a wide range of local business owners. Senator Martin Heinrich also showed up. “Our public lands are the great equalizer, he said. “You don’t need to pull out your checkbook to go there.”

Republicans like to claim that public lands harm western communities. But there isn’t any evidence to support that claim. In fact, a recent economic study showed just this opposite:

In Taos, we’ve seen an increase in visitors, an increase in spending and an increase in tax revenue since the creation of El Rio Grande del Norte National Monument. This trend is by no means unique. It happens all over the West. Public lands are a vital economic driver for our community, among other benefits. State governments, like that in Utah, that continually attack public lands face an economic backlash:

Over the last 20 years, the trade show, hosted by the Outdoor Industry Association (OIA) representing more than 1,200 outdoor businesses nationally, has been held in Salt Lake City. However, OIA just announced that it will no longer hold its twice-yearly trade show in Utah citing concerns that elected officials in the state, “from Governor Herbert and the state legislature to its congressional delegation, most notably Representative Bishop, the Chairman of the House Resources Committee, have all actively embraced the idea of transferring America’s public lands to the state.”

In response to that, New Mexico Senator Martin Heinrich told the outdoor industry that New Mexico is open for business:

“As you solicit proposals for a new venue to host the Outdoor Retailer trade show, I would urge you to give strong consideration to the state of New Mexico,” Heinrich wrote. “New Mexicans’ livelihoods are rooted in our open spaces. Families have long histories of using our public lands for hiking, hunting, fishing, and other outdoor traditions, both new and old. New Mexicans also share my unwavering commitment to protecting our natural heritage for our children and for generations to come, and know firsthand that conservation and growing the economy are inextricably linked. Importantly, the outdoor recreation industry is one of the largest sources of economic growth in our state, directly supporting 68,000 jobs and providing more than $450 million in tax revenue and $6.1 billion in consumer spending annually. I hope the outdoor recreation industry will join us in New Mexico as we work to improve access, reauthorize key conservation programs, and stand firm against any effort to seize our lands.”

Colorado is also vying for the trade show. Utah’s loss will be someone’s gain. Public lands have many more benefits than just economic ones. But Republicans continually put forth the false assertions that public lands harm economies. The facts just don’t bear that out and people are pushing back against that deception. Four-hundred business owners and consumers from a town as small as Taos, New Mexico out on a Tuesday morning out to support public lands is impressive. Politicians would be wise to pay attention.

What You Can Do

No matter where you live, but especially if you reside in the Western USA, call and write to your county commissioners, your state legislators and your Governor and tell them you fully support public lands and that you oppose any action that will harm the management of public lands or that will dispose of public lands.

If you enjoyed this post, please sign up for email notification at the bottom of the page.

Now it is National Monuments Under Attack

Republicans Move to Give Away Public Lands

Attacking the EPA is Attacking Clean Air, Clean Water and You

For Sale! America’s Public Lands Are Up for Sale