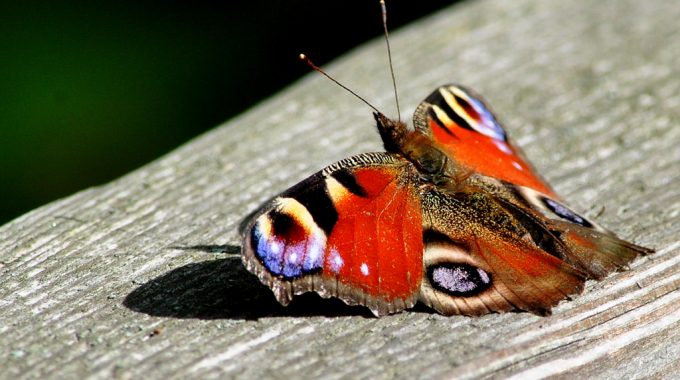 It is a humid mid-morning and the pond is glassy. Dragonflies pass over the muddy flats marking the edge of the water. A Red Admiral butterfly rests on a golden point of grass. A fat and roly-poly yellow bee lumbers between flowers, hitting the yellowest first and only afterwards tasting from the blue bells and the Swedish coronels.

The water is crammed with silent ducks, seagulls, terns, grebes, herons, swans, cranes and several types of waders. There are sea eagles overhead and yellow-breasted great tits in the groves that ring the pond. Those are groves of birch and alder and the berry-laden rowan that towers over dead, lichen-covered oak underneath. The stones out in the ponds are white-capped with smears of stinking seagull poop but they reflect in the water like distant Shangri-La sheltering mountains. 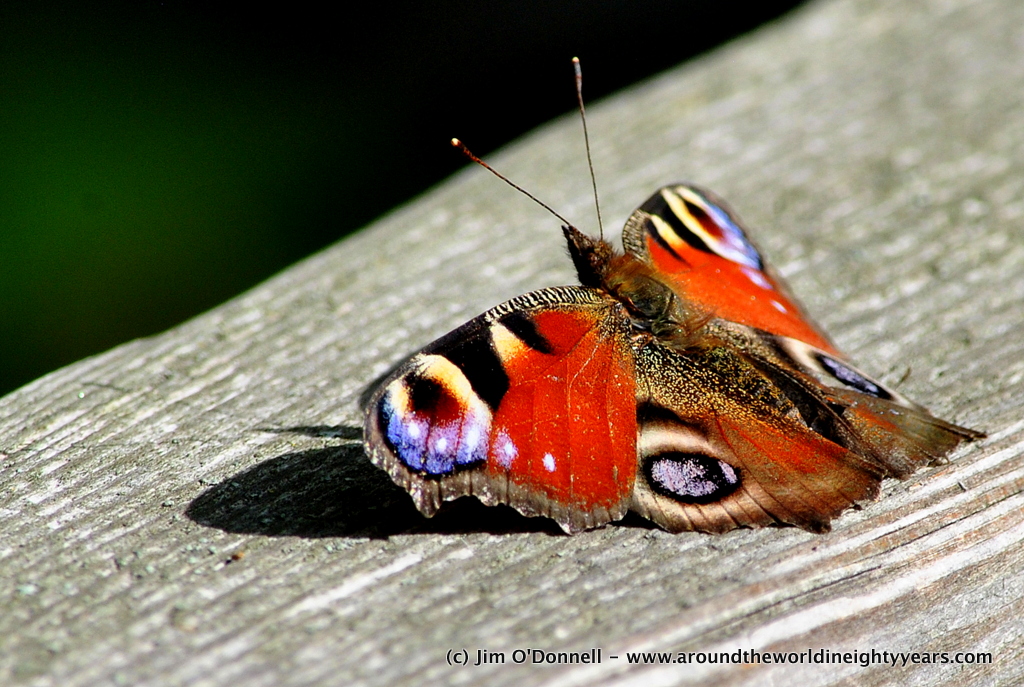 Back among some spruce an old man is picking blueberries with a scoop and dumping them in a red bucket. He is dressed in blue coveralls and waves away my Finnish greeting. “I only speak Swedish,” he tells me and then dumps a mass of berries into my hand.

There are the white cliffs of Dover, the Louvre, the fjords of Norway, the Pyramids of Giza, the karst mountains of Yangshuo…and then there is the Bodvattnet at Bodback in the Kvarken World Heritage site.

The Bodvattnet is shaped like a ghost pressed into a flower book with hands and thin fingers that smear to the northeast and southwest, running feet to the south, small islets for eyes and a flash of swept-backed hair near the channel that used to allow access to the open sea. Protected from grazing cattle by a portable electric fence that pops in spots along its run, the pond is a nearly closed off bit of water that freshens year by year as the sea grows increasingly distant. It is also an area that is shrinking as the edges turn to mud and then swamp, then grassland and ultimately forest.

The Bodvattnet won’t exist by the time my grandchildren are born.

Until the mid-1940s Bodback harbor was the main sailing point from the community of Björköby. men departed for the sealing and fishing grounds in the Gulf of Bothnia. The postal boat to Sweden also went from here. This is the harbor where Barclay de Tolley’s Russians began – and ended – the disastrous trek across the sea to Sweden in 1809.

You can become fixated on the very small amount of land that rises from the sea every single year. It is just a centimeter after all. But then you lose perspective because, over the course of a human lifetime that rise amounts to nearly a meter, or around three feet. Give some thought to that. Over the course of your short passing on this Earth massive changes take place here in a land rising from the sea. The water runs from the land, new rocks appear, plants begin to grow, shorelines change and entirely new habitats are formed. One-hundred and fifty new soccer fields appear in the Kvarken World Heritage site every year. If you are a member of a sea-side harbor community all you can do is watch helplessly as the sea moves to the west and your boats sit on freshly exposed granite.

If you’re a smart businessman you might just purchase the next best place for a harbor.  Or some sea front property. In just 2000 years a land bridge will connect Finland and Sweden. 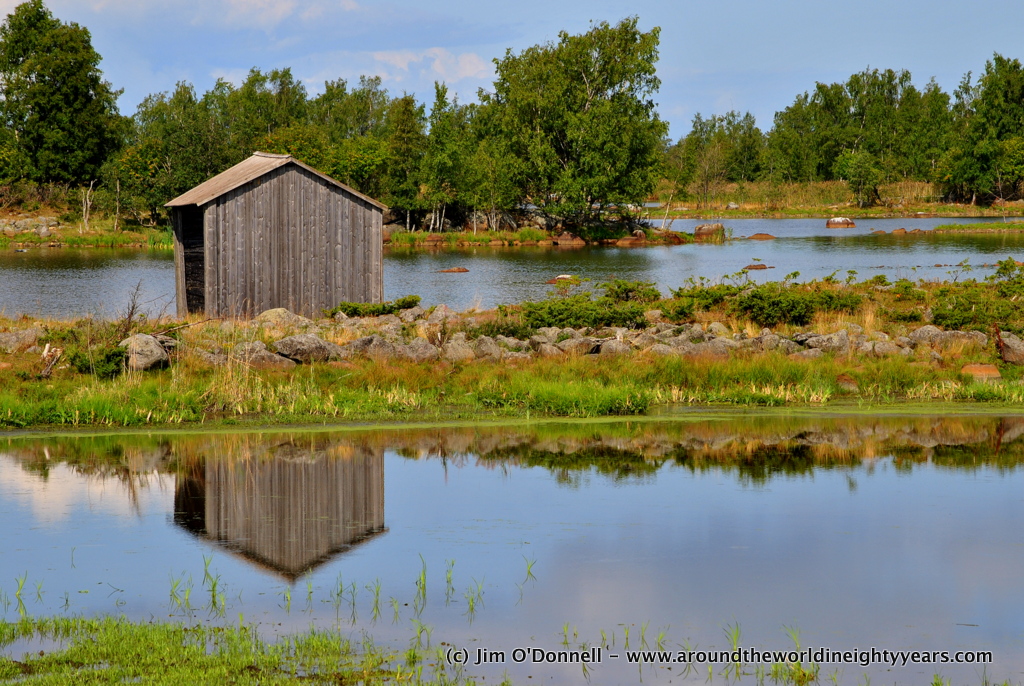 Bodback was at its busiest in the 1920s. More than 130 storehouses crowded its shores with houses behind them and docks sticking this way and that into the water. From here men went to sea for fish year around and for seals in the spring when they dragged their boats over the ice and out to the open water for the hunt and then sailed slowly back home over months as the ice melted into the spring. The fishing in those days were mostly for Baltic herrings and it was done with nets. When the boats returned the women helped the men to shake the herrings from the nets, hang the nets to dry and then clean and salt the fish, stuffing them into great barrels either to save for winter or to send to market in Vaasa. 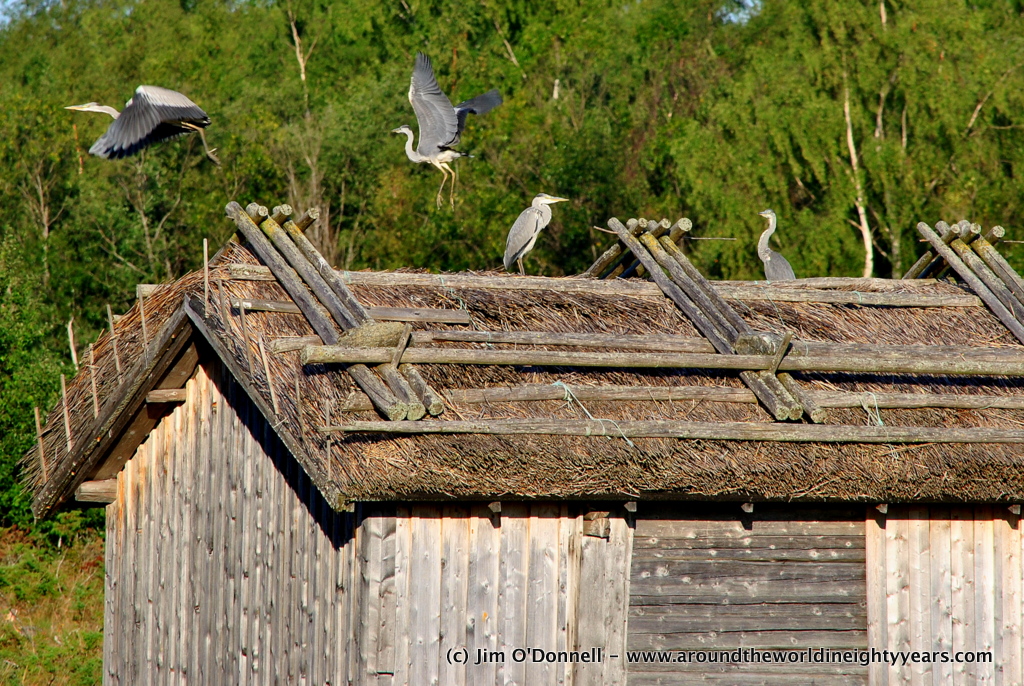 Less than a dozen of the storehouses remain. They are gray with roofs made from swamp reeds held down by large glacial stones or rounded beams. At one time they held the boating equipment. The sails, oars, fish barrels, nets and decoys for bird hunting. In the winter, before the seal hunts, the boats were protected and repaired in those structures.

The roofs of the storehouses are made of reed, which is replaced bit by bit. Rounded beams and stones are used to weigh down the reed. The storehouses once held boat equipment, sails, oars, fish barrels and nets and bird hunting decoys. They also stored the boats there in the winter. 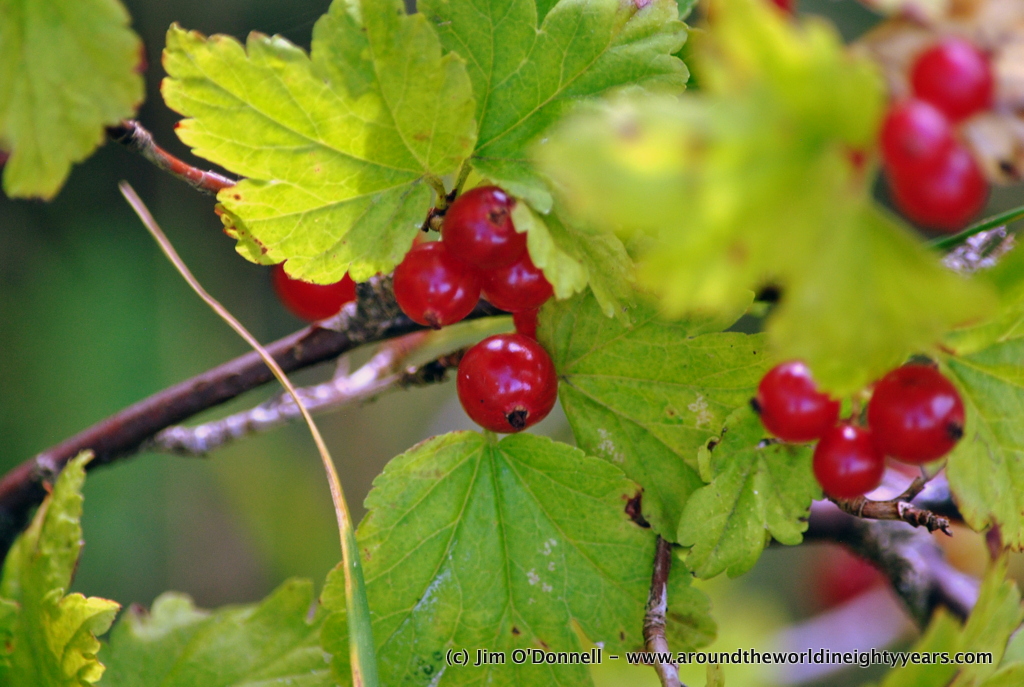 By 1950 the harbor had been abandoned. The storehouses and boats moved a kilometer or so northeast to Svedjehamn – itself slated to be abandoned at some point in the near future for a deeper harbor, perhaps one closer to the edge of the open sea. One that won’t have to be abandoned for a hundreds years or so. Any harbor here will inevitably need to be abandoned as the land continues to rise.

West of Bodback and down the south-side of a very low hill is a small brook named Båodverkan or Krågrundsbäck. The “ å ” is pronounced more like an “ o ” and the “ ä ” like a long “ a ”. Roll your tongue for the “ r ” just a little bit to get it right.

The creek demonstrates how life continued to change.  The increasingly distant sea wasn’t the only thing.

Fishing was prohibited at Båodverkan in 1953 but the children were allowed to take from there for awhile. Eventually the fish stopped going there. Now, fishing in the Bodvattnet is banned all year around. Fishing in the area immediately surrounding the ponds such as in the Svartbådavattnet is banned from the first of March to the first of June to allow the fish to spawn. 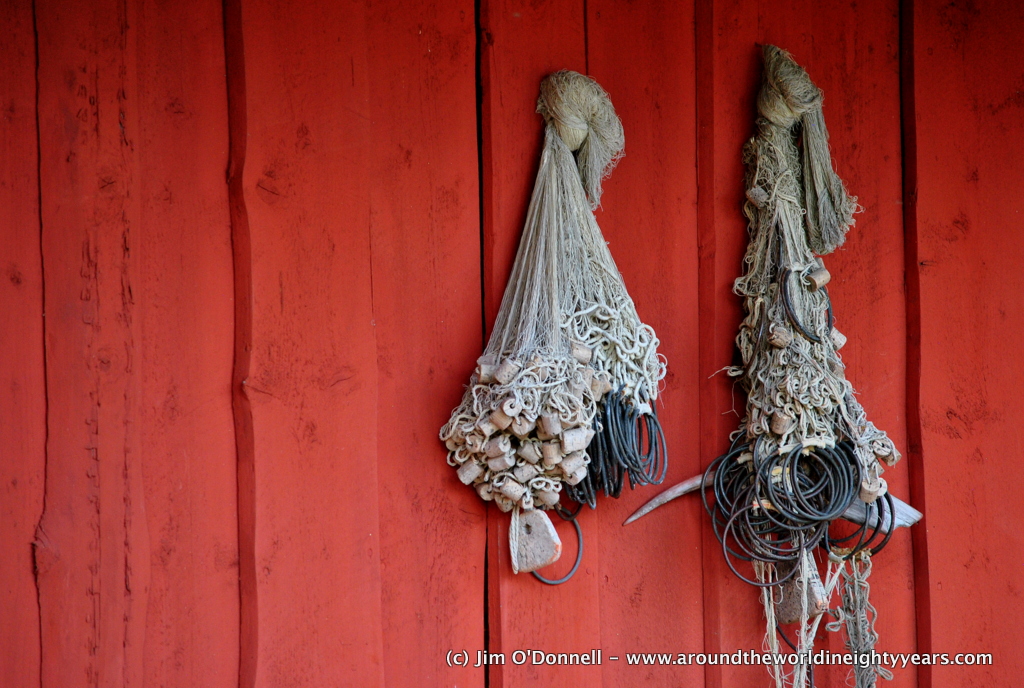 I heard some grumbling on that point from one man. “There are plenty of fish,” he claimed.  That is hardly the point though, is it?

More often than not, when people cry foul over the stoppage of a use such as fishing or hunting or timber harvesting the blame falls on nefarious “do gooders” and “environmentalists”. But what they forget is that the resource, in this case fishing, was in danger of running out from overuse and abuse in the first place. The reason that environmental protections were put into place in most cases was because the people using the resource were not responsible about the use of that resource in the first place.

When fishing was banned in 1953 it was because the waters had already been over-fished. Now that the resource has rebounded thanks to environmental protections, some people forget that the fish were almost gone in the recent past and they cry and shout to have the right to abuse the resource again.

But maybe not so much here where the Bodvattnet became a haven for nesting birds. And spawning fish. And endemic species of grass and berries and where a thickening number of visitors to the Kvarken World Heritage site who come each year to spend their money in local businesses so that they can watch the birds, take pictures of the butterflies and flowers and cast for pike and perch beyond the ponds in the bays where the fish spend their adult lives and the eagles hunt for pike and tern and cartwheel through blue skies and then raise their little ones in turn and watch the land rise from the sea at a speed only the trees can understand. 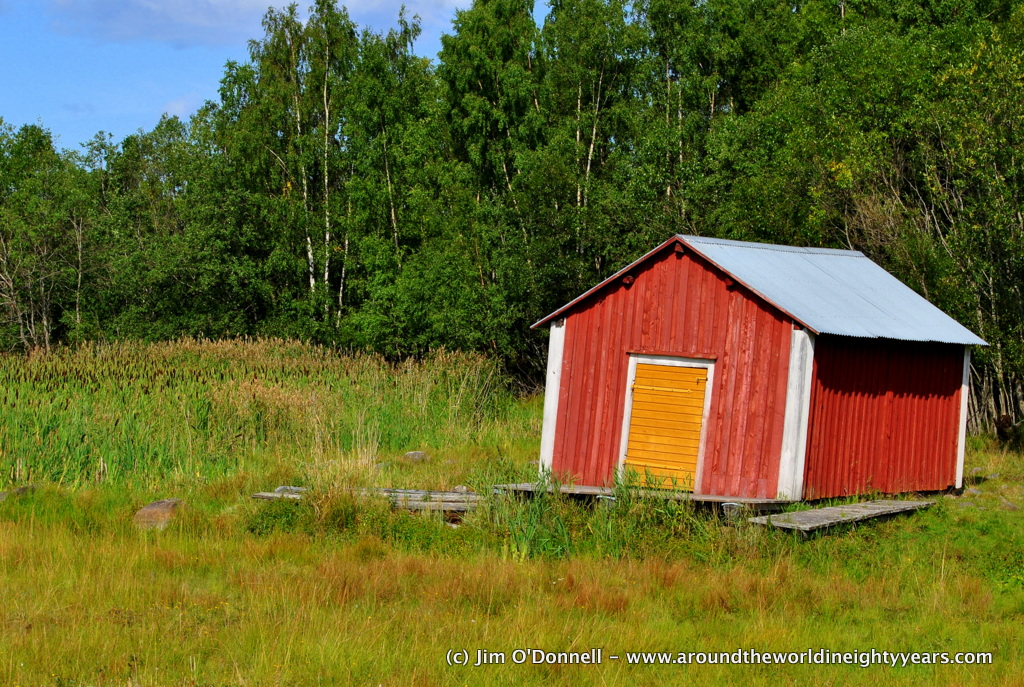