“Albeit they have neyther meadows, nor pastures, nor arable grounds neare their city…they have as great abundance of victuals, corne and fruites of all sorts whatsoever…being plenteously ministred unto them from Padua, Vicenza, and other bordering townes and places of Lombardy….As for their fruits, I have observed wonderful plenty amongst them, as Grapes, Peares, Applees, Plummes, Apricockes; Figges most excellent of three or foure sorts….another special commodity when I was there, which is one of the most delectable dishes for a Sommer fruite of all Chistendome, namely muske Melons.” – Thomas Coryat, 1611

It may have been the “center of the Universe” at one time but, given its history, everything in Italy is regional.

Even within the Veneto, the area of Italy where one can find La Serenissima herself – the city of Venice – there are differing cuisines. The highlands serve up wild meats, cheeses and mushrooms.  The plains tend towards grilled meats. Along the coastal areas as one would expect, the menu is heavy with seafood.  In Vicenza they were known for eating cats – alot of cats.

Venice began as, literally, a backwater refuge for the Roman citizens fleeing the approaching Huns. Later the farmers and merchants of the coastal Adriatic took refuge from the Lombardians and Franks in the 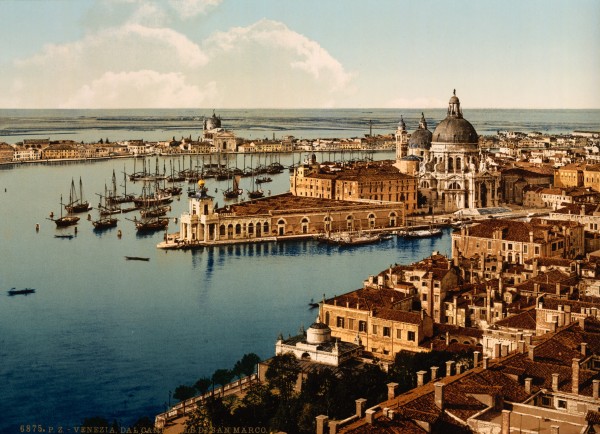 extensive swamp.  Over time, as we know, the Venetians grew a large and powerful state that controlled much of the eastern Mediterranean and had a profound impact on the development of modern Europe.

At the center of it all, as always, was food. The Venetians rulers learned early on that by controlling food sources and maintaining a well-fed population they could fight off any enemy and extend beyond the lagoon to control vast trade networks that extended into Asia. The fleets of Venice kept the larders full. The hotels in Venice were always packed with merchants. This was the most cosmopolitan city of its day. Food from Venice was known far and wide For nearly 500 years, until 1492, the Venetians were the traders that connected Europe and the Islamic world.

As I wrote here:

“Late Medieval visitors to the city were stunned by the variety of products in Venice’s markets. At the time Venice was the most urbanized area in Europe. There were sacks of spices from the east, food-stuffs that never reached other areas of Europe and clothing and adornments that screamed out the bizarre affluence of a city build on sticks in the mud.

Venice had access to things the rest of Europe had only heard about. From about 1100 AD on, the Venetians grabbed hold of one little island after another. They took this harbor and that. Before long they were in control of places like Corfu and Crete and Cyprus and held cities from the Lebanese Coast to the Black Sea.

Venice was a bully, a remorseless conqueror, exacting a terrible cost on anyone who stood in the way of the republic’s goal of complete monopoly over all their maritime trade routes.”

The Venetian table was known throughout Europe and the Middle East as the place you wanted to be seated.  You can trace the development of Venice from shelter of refuges to the height of the Republic through three simple recipes.

Obviously fish were a massive part of the early Venetian diet.  When the first refugees arrived they may not have known exactly how to deal with the massive change of environment they encountered. Remember, many of them were city people or farmers. Given that their new home was literally on the sea there were endless amounts and varieties of fish, shellfish and turtles to be had. The question probably wasn’t one of there not being enough food but rather, how do we cook this stuff?  Well, birds also like fish and one can imagine the Venetian lagoon a paradise for birds way back in the day. Birds like storks, swans, goose, duck and, yes, heron. Maestro Martino   wrote that the ancient Venetian method for cooking up heron was to:

–       Stuff the insides with onions and garlic and tie it up

Rather simple really and even though this birder loves his birds in the air, the food from Venice sounds rather tasty.

The refugees didn’t just sit tight on their little tide-washed islands and become itinerate fisherman living at the whim of the sea. Quickly the people of Venice set up a government and began to build fortifications and even cities. They began to reach out adn import a wide variety of foods including wheat from Sicily, Greece and Egypt as well as the all-powerful salt. It didn’t take them terribly long before they had taken control of many of the agricultural areas on the mainland.  To ensure Venitian bellies were full, Venice needed this area. The result was that food from Venice was a marriage of foods from the mainland and the sea. These new areas under Venetian control were rice-growing regions, which is why Venetian cooking is heavily dominated by rice and not pasta. What pasta they did have was the bigoli, a pasta that is nothing like the pastas from other areas of Italy. I’d call it “rough”. Anyway, after Columbus sailed to the new world, corn took the place of rice in many dishes and so you get the famous polentas that are combined with, yes, the fruits of the sea:

–       Cook the polenta over low heat until the grains are nice and soft then stir in butter, salt and pepper.  Reduce heat and keep warm

–       Take your small Venetian gray shrimp fresh from the lagoon and fry them up in a nice skillet of olive oil, add chopped garlic

–       Spread the polenta on a plate or better yet in a bowl and top it with the shrimp, oil and garlic.

The Arabs did make several stabs to take the Italian peninsula about a thousand years ago.  Success was elusive but as with all clashes of culture new ideas and foods were left behind, the time in the form of citrus trees and almonds. The Venetians raved about pies of oranges and baby eels. Almonds became one of their favorite imports. With the almonds they made milk and marzipan – both Arab concepts. As they always did, the Venetians combined these introductions with the bounty of the lagoon. Sardines in a sweet and sour sauce was one of the results:

–       Clean and season your sardine catch with sale and pepper

–       In another pan fry up some onion, stir in your wine soaked figs, chopped almonds and just a little vinegar and salt and pepper.

–       Lather the sardines with your onion/fig/almond sauce and viola!

Venice lost its place as the center of the world soon after the Spanish arrived in the Americas.  And so, this city of chefs and experimental cuisine turned to cookbooks printing up Apicius’ recipes in 1498 and then of course the books of Martino, leaving we food-loving historians lots of things to contemplate and lots of reasons to salivate about food from Venice.