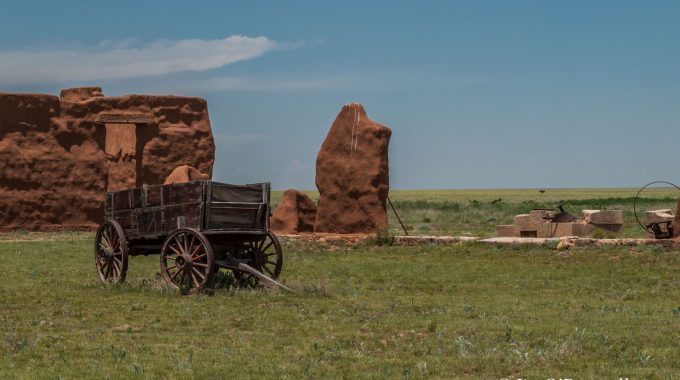 Sunday the kids and I drove across the mountain to the edge of the Great Plains to Fort Union National Monument:

A bustling center of frontier defense in the Southwest for four decades, Fort Union was the largest U.S. military post in the region and a base for both military and civilian ventures that molded its destiny. Astride the southern end of the Mountain Branch of the Santa Fe Trail near the point where it merged with the southern terminus of the Cimarron Cutoff, the post was one of the most important of a string established in New Mexico and southern Arizona in the area acquired from Mexico in the Mexican War (1846-48).

The fort’s mission was broad. It protected the Santa Fe Trail, on which it was a resting place and refitting point and a stopping point for Independence, Missouri-Santa Fe mail coaches; was the major Army supply depot in the Southwest; served as a transportation center for civilian wagon freighters carrying military supplies; and provided a base for campaigns that penetrated the homeland of the Apache, Ute, Navajo, Kiowa, and Comanche. Also, in a phase of history extraneous to this volume, the fort played a strong role in repelling the Confederate invasion of New Mexico from Texas in 1862; it was the prime staging area and logistical base and supported the force of Colorado Volunteers that won a victory over the southerners at the Battle of Glorieta Pass, New Mexico in March, 1862.

Fort Union’s remoteness keeps the crowds away. The heat also helps and at nearly 100 degrees I was in heaven. The praries were lush with all the rains and the number of birds just within the monument were impressive.

In the photo above, the Artillery Company of New Mexico and the 3rd Regiment New Mexico Volunteers engage a mountain howitzer they had pulled out to help them talk about life at the frontier fort and to give us a demonstration on how these old weapons worked.

I’m just never sure those were really “the good old days”.

My Shot of the Day – International Day for Biological Diversity – May 22, 2015

Just a quick wish for a happy International Day for Biological Diversity! The United…