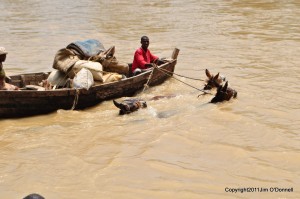 By eight o’clock in the morning we were bunched up with the boxes, sacks, mules, chickens, children farmers and

merchants at the edge of the Artibonite River. Everyone talked at once and the crowd on the opposite shore whooped and hollered encouragement.  The boys running the service bailed the silty orange water with plastic cups.  Once the bottom was relatively dry they loaded the sacks of rice. Then they tied on the mules.  Then they loaded the people and set off. The girl next to me removed her glittery high-heels as the water seeped through the wooden floor.  We looked at each other, simultaneously wiped at the sweat running down our faces, smiled and shrugged.

Across the river the village sprawled out along a cross of four main foot-roads and a spider web of hundreds of narrow and twisting paths between the river and the mountain. Nearly everyone farms small patches of difficult clay fenced by a ubiquitous cactus-like succulent that grows to five or six feet. Corn, yam, patat, breadfruit and coconut dominated the fields.  But there were never enough trees.  You could also find an occasional mango, some avocados, millet and a few other foods.  It wasn’t a lot of variety. The farmers said they wanted to plant melons but just couldn’t afford the seeds.

The kitchen that served the small group of volunteers sat under a blue earthquake tarp someone had brought from Port-au-Prince.  It was marked “People’s Republic of China” in yellow letters.  Earthquake buckets from USAID held the water.  The women worked from two tables. They had a little propane stove, several small pots, one skillet and a confusion of shiny utensils.  The grandmother sat out of the sun in a dark hovel that swallowed everything but her milky eyes and her fingers.  You could see her fingers work deftly, cleaning a spinach-like leaf, limes and beans for dinner.  Scrappy chickens came and went.

The women were scrupulously hygienic.

For breakfast we sipped at small cups of stunningly fine Haitian coffee, boiled plantain, white bread, peanut butter spiced with a Scotch Bonnett pepper and an onion omelet. Everyone else added sugar to their water. I begged for more coffee.

The farmers left early to the fields before the day turned to sweltering. Some didn’t return until the evening. For those that did, lunch was white pineapple, mango, banana, plantain and bread.

The afternoon rains came in dark torrents and the roads turned to muddy rivers and everyone was stuck. We drank iced Prestige, the local beer, and watched the lizards chase bugs.

Dinner tended toward the sweet Artibonite rice, red beans and okra in sauce that tasted a bit like canned herring. Mayi moulen was another meal of which we got a healthy dose.  This was a tasty, savory cornmeal porridge topped with a stew of eggplant, the spinach-like leaf and possibly some carrots, spiced with onions, garlic and some tomato paste you would find yourself full on just half a plate. Haitian food is typified by strong flavors.  The women use herbs, and a liberal dose of spicy peppers, in every meal.

It can’t be said that food is plentiful in rural Haiti. No one I saw was starving.  But it would be dishonest to hint that people weren’t living on the edge.  You can’t escape the sense that one bad year could lead to disaster.

In other places it has, and some Haitians literally eat dirt to fill their bellies.