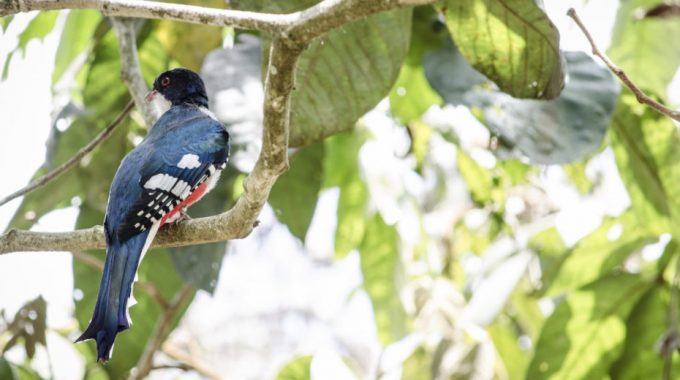 North of Trinidad the Sierra del Escambray winds its way across the landscape for about 90 kilometers. The mountain range is Cuba’s second largest and looks somewhat like the battlements along a castle wall. The mountains are not particularly high but they are steep. The valleys remote. Within the sierra lies the 200 square kilometer Topes de Collantes. While often mistakenly called a national park, the Topes de Collantes is nonetheless a heavily protected area.

Cuba is hands down the most ecologically diverse island in the Caribbean.  There are more than 10,000 endemic species on the island. Cuba also has some of the best protected land and water in the Caribbean.  Many of the protections date to the early 1960s but it wasn’t until 1992 that Castro took a formal stand for conservation and that has resulted in the legal protection of about 25% of Cuba’s land and water. On the ground implementation has been a struggle, but not a failure.

Along a shaded path next to a clear river Reinier Toscano Orbea a professional nature guide working with Espiritu Travel, called for the the tocororo, Cuba’s national bird. The tocororo is a trogon. Its colors mimic that of the Cuban national flag. It is a gregarious creature and a male, curious as to who was imitating his call, dropped out of the forest and onto a branch near the trail for a look. The humans watched the bird and the bird watched the humans and I wondered if he had a list. “Oh an American. I’ve seen that species before.”

Reinier is impressive with the bird calls. Ten minutes later he was talking with El Pedorrera, a member of the kingfisher family that got its Cuban name, “little farter” from the sound it makes when it darts from a branch to pick an insect out of the air. Then we saw a woodpecker whiz through tree ferns to a stand of eucalyptus. Along the path that eventually led to a clear blue swimming hole, Reinier pointed out different species of pines and palms and mahogany. The air was fragrant with humus and rotting wood. Alson the path spilled a seeming non-stop array of blooming yellow orchids. The sierra hosts more than forty species of orchid and around one-hundred species of fern. Reinier pointed out various lizards, butterflies, vines, jasmine and begonia. He stopped now and again to peel out a particular nut from a certain tree or to demonstrate how Cuban farmers once used the palm trees for an impressively wide array of daily needs from ropes to roofs.  “These mountains are so steep and remote that Che and his men were able to hide out here, with the help of the coffee farmers, for months without the CIA and Batista’s troops finding them,” Reinier said.

(Join one of my photography tours to Cuba !)

After hiking through the tropical rainforest all morning I rinsed my sweat soaked body in a frigid waterfall  careening down a fifty meter cliff. Then we made our way about halfway down the mountain to a simple, two-story construction of red mud buried under towering pines, palms and banana trees next to a pond teaming with tilapia. This was El Manantial.

“El Manantial. Best meal in Cuba,” Carlos Gonzales had told me earlier in the morning. “Trust me.” Carlos is the main tour leader for Espiritu Travel. “Reinier knows the place. He will take you.”

Now hold on. As you may know I’m a bit of a foody. For me, culinary explorations are one of the top reasons to go anywhere at all. While preparing for this trip I read again and again that Cuban food was nothing to write home about. Website after website and guidebook after guidebook told readers ‘you don’t go to Cuba for the food’.  Well let me say right here and now…and let me say it loudly…the food in Cuba is freaking INCREDIBLE. I mean, hands down some of the freshest and best prepared food I’ve had in all the 40-some countries I’ve visited.  Yes, you DO go to Cuba for the food and El Manantial is the perfect example why.

On the shaded patio next to a gurgling stream that fed the tilapia pool, Oscar and Aray, the owners, served up a massive salad of fresh carrots, beets, cabbage and tomato next to a soothing vegetable soup, heavy on the garlic. The main course was barbecued chicken cooked in fragrant cumin seed. It held a hint of orange peel and pepper and the meat fell from the bone like butter.  I barely had room in my stomach for the pudding-like flan. But somehow…somehow, while the house parrot watched me from the chair at the next table, I managed to squeeze it in.

I fell into a food coma before we pulled out of El Manantial’s driveway. Reinier had to wake me when we arrived in Trinidad.

From the roof of the Media Luna I could hear music coursing down the narrow Trinidad streets. It was about an hour before sunset and the air had cooled enough for me to follow my ears down the stairs and past the fountain out on to the streets and towards the cathedral.

Two cowboys walked up the cobblestone street and into a throng of Chinese tourists wearing surgical masks and latex gloves. Each Chinese tourist held an unwieldy paper map. The cowboys were silent and polite as they passed through the crowd and then turned a corner and burst into laughter. Then they stopped, did an about face and went back to the corner and just watched, seemingly enthralled. We were all watchers. The Chinese watching the Cubans and the Cubans watching the Chinese watching them and this American watching all the watching. I snapped a photo of the Cuban watchers and turned to find another Cuban watcher, a woman with a child, watching me. We both cracked up laughing. Tourism can be insane.  I walked on towards the music.

Every Cuban town and city has a Casa de Música but Trinidad’s is unlike any other. Think of the Spanish Steps in Rome inside a cave of sheltering trees. The stone steps of the Casa de Música sit just to the east of the cathedral. Paladares sprawl into the streets nearby. About halfway up the steps and to the left is a stage where Cuban musicians get down, belting out salsas, trovas and reggaeton while listeners and dancers have at beer and mojitos. Some of the Cuban dancers were stunning, cajoling Americans and Europeans to join in. The stairs are also an internet access point for the town and Cubans and tourists alike sit along the wide stairs clacking away at smartphones.

Just before sunset Alfons and Renate joined me at a table and we savored a rather strong mojito. The Cuban bartenders don’t hold back on the rum, instead pouring as they see fit. Slightly lit with the mojito, Renate and I made a dash for the La Iglesia y Convento de San Francisco and paid the cranky guy at the door 1CUC to access the bell tower. We climbed to the top just in time to watch the sun sink behind the Sierra. A thunderhead built up and collapsed just to the north of the green mountains and we could see a sliver of Caribbean blue to the south. Below us waiters were patient outside the paladares, musicians carried their instruments towards the Casa de Música, a group of girls played in the plaza, a grandmother sucked on a cigar and the smoke from hundreds of small cooking fires wafted across the rooftops.

Alfons had faithfully held our table and had fresh mojitos waiting for our return. By the time the stars were out the music was hot and fast. Tables were pushed to the side and the stairs were filled with hundreds of dancers from every corner of the world.