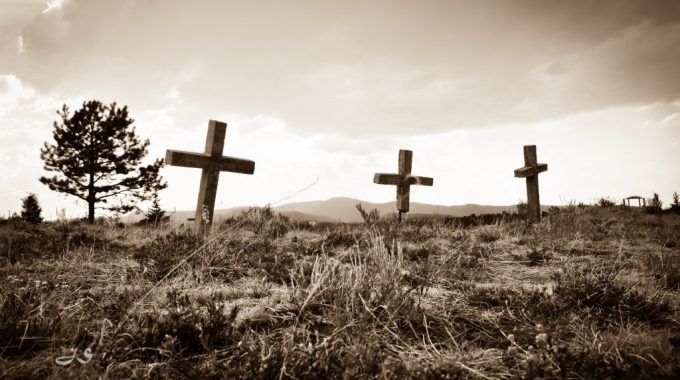 The very first thing that comes to my mind when I think “cemetery” is a polka.  My favorite polka actually.  Specifically Tom Waits “Cemetery Polka“.

The second thing I think of is a night I jumped a fence in eastern France with a Moroccan archaeologist, a Spanish archaeologist and a French kid who said “Ya.  Nobody will care.  Don’t worry.  It’s just a cemetery”.

It was an American military cemetery from World War I. After spending an hour searching through the graves for all the kids from New Mexico and Colorado I sat down and reflected on the absolute ridiculous waste of that war – and of most wars.

And then the police came.  It seems as if someone did care. Spending the night in a rural police station sipping coffee is was not the worst moment of my life, that to be sure.

Today I take my kids to picnic in the Kit Carson Cemetery in our home of Taos, New Mexico.  Its the most peaceful of places and a location where one can wander and learn – and nap.

I don’t find cemeteries places of sorrow but of wonder.

January says: “This photo was taken at the Elizabethtown cemetery in New Mexico; 4.8 miles north of Eagle’s Nest on NM 38. Now a ghost town, Elizabethtown, the first incorporated city in New Mexico and founded by Commander of Fort Union William H Moore, was named after his young daughter, Elizabeth Catherine Moore. At its height of prosperity, in 1870, it had just over 7,000 residents. The most famous being the serial killer Charles Kennedy who was responsible for 14 known murders including his own son, and the famed vigilante Clay Allison.

Today, all that stands are a few old buildings and a cemetery with many graves including children under the age of 3 years old. The overgrown grass makes it difficult to see some of the graves and some without names entirely. Just being there and thinking of the past was a humbling experience and I plan on going back.”

Colby says: “In a corner of our world, under the silent watch of Black Mesa, generations sleep, tucked and huddled in the sand. For centuries the dead have been laid in the small walled yard in front of the Spanish mission church. According to my friend, it usually takes a half a dozen tries to find a “new spot”.

A hundred or so of us living, greatly out numbered by those who are not, gathered this late morning to see our friend be married. I caught a young girl walking past generations of her ancestors to celebrate a part of life, that for those others has passed…..”

Steve says: “I love the stories that go with the stones you find in cemeteries. The cemetery in Como, Colorado is now overgrown with aspens and brambles. The days of Como as a bustling switching station town for the trains from the ore fields are long past. Como is now a sleepy little town but the cemetery is full of  great stories and questions. Who was Daisy Stark? What was the cause of her early demise at age 13? Maybe we’ll never know.”

John says: “A very old grave, resting with at least a few others, in the beautiful courtyard at the Mission Basilica San Diego de Alcala, located on the Eastern end of San Diego’s Mission Valley, just along the San Diego River. This Mission was the very first Spanish mission established in California. There are 21 Spanish missions spanning the entire state of California, all established during this period, 1967 through 1823. These missions were comprised both religious and military activities. Their “mission” was to spread Christian faith among the local Native Americans. These missions were the first major Euro-efforts to colonize along the West Coast, giving the Spanish a major foothold on the new frontier.”

Debra says: “Greenwood cemetery was established in 1880 and is located near downtown Orlando. With 82 acres of rolling hills, beautiful flowers, huge old trees, lakes and bridges and wildlife, it makes for a beautiful setting for many activities likes bicycling, jogging and just taking a nice stroll thru the winding roadways.
Every year we visit Greenwood cemetery from October till April to document and photograph a pair of nesting eagles & nesting Barred Owls. While we wait for the eagles to take turns going out hunting and taking care of the eggs or eaglets we are often visited by the cemetery coyote, along with many different species of birds, ducks and other species of wildlife.
For more interesting information about this urban wetlands cemetery just Google Greenwood cemetery, there is so much history here.”
Find more from Debra here.
~ ~ ~

Portobelo was once the largest and most important Spanish port in Central America. Today, the World Heritage Site is a fishing and farming village on Panama’s Caribbean coast.  There is a 1.5 meter high statue of a black Christ inside the Iglesia de San Felipe. How it got there is a matter of contention and confusion. The stuff of legends that never quite match up.  The interior walls of the church are embeded with headstones from a disappeared cemetery.
~ ~ ~

Jess says: “This Paddle-out ceremony for Ocean Beach native Chris Wheatley’s funeral on August 23, 2009 was held off the coast of OB’s Sunset  Cliffs.  Chris’s family and friends attended on surfboards or stood on the cliffs to witness the scattering of his ashes in the ocean he so loved.Ocean Beach is an eclectic San Diego community of surfers, artists and yuppies just north of Point Loma.  My wife, Linda, has known Chris since he was a kid and worked with his mom at the Bank of America in Ocean Beach years ago.  Chris was a really well-known local surfer, as was his dad.”

Joan says: “Rookwood Cemetery is so large that it is considered a suburb itself in western Sydney, Australia. It is the ‘biggest multicultural necropolis in the Southern Hemisphere’ with total estimated burials approaching one million.

The historic headstones in this section, the Old Wesleyan, have suffered periods of neglect and many are now unmarked and vandalised. There’s also the more modern sections which are cared for –  the resting areas for the Jews, Muslims, the Crematorium and the  Circle of Love, for stillborn babies or those who died in infancy.

Rookwood Cemetery is not only a sacred place of remembrance and peace. Rookwood also captures history and reflects Australia’s multiculturalism. ”