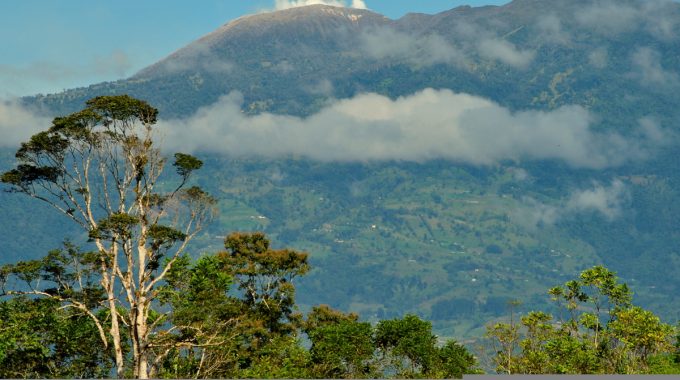 From the crest of the hill above the center of the site there was a clear view south and an odd, pointy mountain jutting from a plateau several miles distant. It stood out like a sore thumb. In fact, it looks like a giant thumb.

I asked my guide, Rosa Fernandez, if it was a man-made structure because it certainly looked like one. The answer was a hesitant negative. “It is probably some sort of volcanic plug. But it is something important,” she said. “We just don’t know what.”

The more I learn about Central American archaeology the more it becomes apparent that researchers just don’t have enough information to work with.

About 20 kilometers north of the town of Turrialba up a steep and winding road lined with lazy dogs and men descending to sugar cane fields lies the pre-Columbian city now protected as Guayabo National Monument. The ruins sit on a plateau over 1000 meters (3,300 feet) above sea level on the southern flank of Volcan Turrialba, the still smoking hulk of volcano that dominates central Costa Rica.

The site is literally at the end of the road. We passed off of the pavement and stopped at a colorful little house set among some palms to gather Rosa. Then we banged up the dirt and rock road to the monument.

Current research has the archaeological site of Guayabo covering at least 20 hectares (50 acres) and its road network extends of many kilometers beyond that. The entire national monument covers over 200 hectares (500 acres) It was occupied on and off for about 2500 years beginning in 1000 BC – most likely by members of the Macro-Chibchan language group. Gauyabo was a major trading center linking Gran-Chiriqui to the south with the peoples to the north.

Or so the thought goes.

The problem with archaeology in Central America – it seems to me – is the lack of research. Funding is of course always an issue but so is the forbidding landscape. Not only is the forest a thick blanket across the region but the steep and varied landforms makes systematic research challenging and easily obscures cultural remains. The other reason is that in many cases we simply don’t know what we’re looking at or looking for. Our cultural pre-conceptions clouds our science.

So we have places like Guayabo National Monument and Barriles in Panama that are tantalizing but far less famous and researched than the Tikals, Machu Picchus or Mesa Verdes.

And yet this place wasn’t a joke. Upwards of 5,000 people (possibly more) may have lived in Guayabo at one time – although all population estimates are in dispute.

None of that impressiveness is apparent at first. It took me several hours of wandering around and listening to Rosa patiently answer my questions to get a picture of what had gone on at Guayabo in the years when it was a thriving trade and ceremonial center.

First of all the location of the site is obviously strategic. The Rivers Lajas and Guayabo run down the volcano on either side of the town. It over looks the entire horizon south. In fact, the so-called “Celestial Stone” found at the site is thought to be an ingenious celestial map and calendar of the southern sky between -90° and -60° latitude so it was clearly an important viewshed for the inhabitants.

Second, the place had plumbing and an engineered municipal water supply. The main water system was fed by several upslope streams as well as a diversion from one of the rivers. The water was carried through a number of underground channels, one of which opened up in the center of the town to serve as a natural air conditioner for the residents. The channels were lined with small stones and sand to filter the drinking water for the town.

The water system continues to function. You can hear it trickled and splashing beneath your feet while you explore the center of the site.

Above the water system lay cobblestone roads, built with retaining walls and taking gradient into account. They spiderweb throughout the town connecting with a major highway that dominates the Turrialba valley and beyond, reaching to both the Atlantic and Pacific coasts. Perhaps not surprisingly, that cobblestone road leading from the site points at the equinox sunrise.

But why else was the town built here?

Rosa led me to a wedge-shaped monolith out in the forest that held a stylized alligator on one side and an upside-down jaguar on the other side. The giant chunk of rock is buried at least a meter into the ground and may hint that the site at Guayabo National Monument was a cultural meeting place of sorts; a crossroads or bridge between northern and southern peoples.

Central America is a land defined by “eco-tones” or “environmental niches”. For human culture this lends a wide-variety of land types to exploit and settle.  It also means that small niches can only support limited population size. It may very well be that the land forced a cycle of inter-cultural and inter-ecosystem cooperation that allowed for a larger socio-political alliance across the landscape. – a confederation of sorts with centers like Guayabo as key market centers that unified disparate cultures.

The center of the ancient town was a cluster of tapered wooden structures topping elevated rock platforms and capped with massive conical roofs towering tens of meters into the sky.

You have to close your eyes and imagine what an impressive place this must have been when it was at its height. Entering from the south along the wide, paved roadway you would crest a small rise and arrive at the two towered gate house. From there, looking to the town you would see the 12-15 meter (40-50 foot) high conical roof of the great house that was strategically situated in front of the volcano to appear as if the top of the house itself was smoking, spewing hot rocks, ash and fire.

The construction and design conveyed power. It must have been an impressive and even awe-inspring experience.

Then it was all gone. By the time the Spanish arrived this town, occupied for over 2000 years, was abandoned.

It wasn’t until settlers arrived in the area in the 1840s and 50s that what was to become Guayabo National Monument was re-discovered. Looted artifacts trickling out of the mountains got the attention of Professor Anastasio Alfaro of the Costa Rican National Museum in 1892 who visited the area but didn’t think it much more than a Pre-Columbian cemetery. For years it was left and cattle ran over it.

In 1968 an archaeologist by the name of Carlos Piedra of the Universtiy of Costa Rica discovered the stone foundation of the mounds and began to uncover the remains of the city. It wasn’t long after that the area was declared a National Monument.

Currently only about 4 hectares (10 acres) at the center of the town have been excavated. Satellite pictures show the site extending well beyond that however. Digging is costly, time consuming and destructive. What researchers need now is a comprehensive flyover using LIDAR (light detection and ranging) technology.

As I’ve noted before, the protection of archaeological sites is a key part of sustainable tourism. By promoting a virtuous cycle in which tourist dollars provide an incentive to locals to protect the very reason tourists come both past and present cultural treasures can be conserved while providing income to local communities.  Rosa and her colleagues in the Guayabo National Monument area are the perfect example of how that can work to the benefit of all.

The concept of archaeological tourism in Costa Rica is a new one.  Guayabo National Monument is the really the only archaeological site currently open for tourism although the Palmar Sur site in the Disquis Delta is now open for limited visitation by appointment.  The Alma Ata site near Sarapiquis that I visted two days after Guayabo is another place targeting tourists for preservation. The site is small and rather over-developed but the tour they offer is top quality (if a little cheesy) and it is worth the visit.

Costa Rica does enforce its National Law of Archaeological Heritage which protects all archaeological sites in the country both discovered and waiting to be discovered.  Artifacts, for example, found outside of protected areas cannot be collected. Costa Rica also sports some decent museum collections and educational institutions related to its past.

Still, the Costa Rica has a great opportunity to work archaeological tourism into the need for more research funding, preservation efforts and economic development.

You May Also Enjoy These Other #EcoCostaRica Posts: