“While some travelers – whether executives, “expats” or tourists- are celebrated for their powers to shrink distances and connect territories, others are fretted about for the same reasons.” – Dr. Ruben Andersson, London School of Economics and Political Science in “Illegality, Inc.” (2014)

This is about travel. Who gets to travel and who doesn’t.

In all my years of travel there are a handful of memories that stand out. About twenty years ago I waited at a windy bus stop in southern Morocco with a group of young West African men. We were all on our way north to Spain. We’d all purchased the exact same slip of paper allowing us passage. While we waited they teased me about my rudimentary French language skills. I teased them about their non-existent English skills. They wanted me to explain to them the meaning of the Pearl Jam song “Given to Fly”. I couldn’t. Eventually the bus arrived. We climbed up and I fell asleep. A few hours later the bus stopped off somewhere in the desert. Several blue-uniformed Moroccan police boarded and calmly removed all the West Africans from the bus.

A few years later, in Mexico, I was again on a bus. This one travelling through the night from Guadalajara to Mazatlan. In the mountains somewhere near Tepic masked men with automatic rifles stopped the bus. They took all the men and laid us down in the middle of the highway.  I was pretty sure my time was up. I imagined my body would be pulled a few weeks later from a shallow grave with a giant hole in the skull. But after a quick check of identification papers most of us were hustled back onto the bus. A handful were not. “Hondureños y Nicaragüenses. Ilegales.” A policeman told me. Illegals. “It’s not your business.”

There is a very stark and unfair disparity in mobility in our globalized world. The Hondurans and Nicaraguans, like the West Africans were migrants. Travelers. Like me. Except not like me because they were illegal. What makes one traveler illegal and another legal? What does it mean for a traveler to be illegal in an age of globalization? 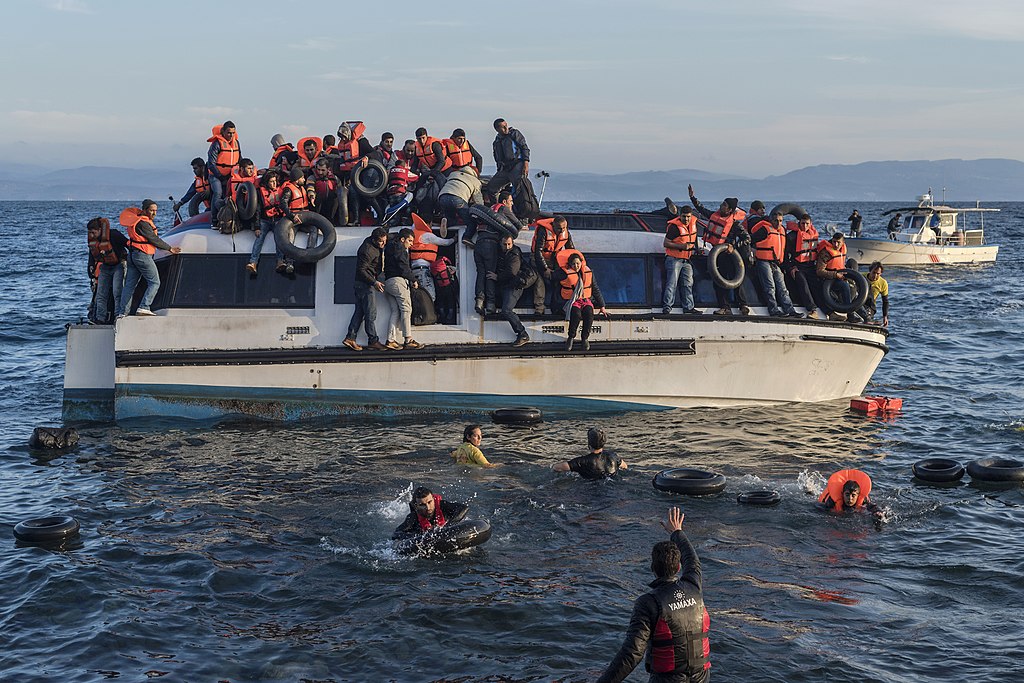 In a 2015 interview with the Huffington Post, migration expert Hein de Haas made the following statement:

“There is a huge incompatibility between economic policies that have very much trended towards liberalization, increasing economic openness and deregulation of labor markets on one hand and on the other hand an increasing call for less migration.

If you create societies that are wealthy, open and de-regularized, then you also create much more demand for migrant labor. These societies inevitably attract migration, and if you close the door, we know what you get — you get more smuggling and more irregular migration because there are no legal channels to match the labor demand.”

This year I wrote two in-depth articles on one aspect of the international migration crisis. The first is about the big business to be had in the creation of a migration crisis. The EU’s migration policy has produced a lucrative “illegality industry” that is prolonging the emergency it was put in place to end. Second is about the outsized impacts anti-migration fences are having on Europe’s wildlife.  A flood of migrants from the Middle East and Africa has prompted governments in the Balkans to erect hundreds of miles of border fences. Scientists say the expanding network of barriers poses a serious threat to wildlife, especially wide-ranging animals such as bears and wolves.

And it isn’t just Europe as we well know. From Australia’s watery frontiers to the no-man’s land along the US-Mexico border, the stark disparity of movement in a globalized world should trouble everyone.

Just Fix the Problem We Created

Many suggest that the countries where migrants originate simply “get their act together” and develop better economies in order to keep people at home. This is pure silliness. Vibrant economies are not simply snapped into existence. They are created over decades. Ironically, in many places it is the richer nations themselves who cause economic problems that force people to migrate. America’s drug addiction fuels nightmares in Central America, for example. Nightmares from which people desperately seek to escape. Without question the so-called free-trade agreement known as NAFTA signed by George HW Bush in contributed to the wave of Mexican migrants coming to the USA through the 1990s and 2000s.

The increases in pork and corn imports were among many economic changes brought about by NAFTA and concurrent neoliberal reforms to the Mexican economy, such as ending land reform. Companies like Smithfield benefited from these changes, but poverty increased also, especially in the countryside.

The growth of poverty, in turn, fueled migration. In 1990, 4.5 million Mexican-born people lived in the United States. A decade later, that population had more than doubled to 9.75 million, and in 2008 it peaked at 12.67 million. About 5.7 million were able to get some kind of visa; another 7 million couldn’t but came nevertheless.

In West Africa, the practices of Europe’s fishing fleets have destroyed local economies that were once stable. Without jobs, former fishermen and members of the economies they supported are now on the move to Europe:

“Senegal’s only resource is the sea. One in five people work in the industry but if you put those people out of work then you can imagine what will happen. Europe is not far away and Senegal could become like Somalia,” said Abdou Karim Sall, president of the Fishermen’s Association of Joal and the Committee of Marine Reserves in West Africa.

Then there is the crisis in Syria and Iraq, the source of so much of the current migration to Europe. Both situations were created in large part by Britain, France, Russian and the United States. And now these countries don’t want to take in the migrants and refugees they helped to create. And so we end up with yet another case of blame the victim. The result of that attitude is just more human suffering and misery. And the innocent always suffer the most.

Of course there will always be someone to take advantage of someone else’s suffering. Look at what just happened in the American presidential election. Everywhere we see politicians demonize people in need to either boost their own political opportunities or to cover up their own political failings. Max Rossberg, the Executive Director of the European Wilderness Society said to me:

“The [European] refugee situation was abused by several extreme politicians to divert from internal issues and problems. The refugees were easy scapegoats to deflect from economic, social and financial problems in some of the Eastern European countries.”

Completely open borders are impractical and unworkable. But so are completely closed borders. There has to be a workable and just system for international migration. In the United States, conservatives often claim that there is a “legal process” for immigration and that that process should be followed. This claim is utterly ridiculous.

Many Americans wonder why all immigrants do not just come to the United States legally or simply “get in line” if they are unauthorized. These suggestions miss the point: There is no line available for unauthorized immigrants and the “regular channels” do not include them.

The result is that by not having a compassionate, workable system we create “illegality”.

There is an alternative reality of arbitrarily labeled “legal” happy travel bloggers and business people zipping around the world at will and in comfort. Nobody cares if a wealthy Mexican dines in Denver or a rich Syrian strolls the streets of Geneva. Meanwhile masses of humans arbitrarily labeled “illegal” pile up against fences and a generously supplied illegality industry. They are stymied on a journey they didn’t want to take. “The term illegality industry highlights how the “management” of irregular migration is a particularly expensive – and lucrative – field,” says Dr. Ruben Andersson.

Being “legal” or “illegal” is entirely random. Illegality happens with the stroke of a pen, a simple act with profound consequences. When politicians categorize people they actually create new ways of being. New ways of seeing yourself and new ways of being seen. Once you were a farmer is Mexico or a student in Tegucigalpa – and then you are a haunting and haunted threat playing cat and mouse with smugglers and authorities along a vague frontier. Being labeled as illegal likewise creates a sort of feedback loop whereby a person who is seen as illegal and starts to see themselves illegal begins to act in ways that are often seen as a sure signed of “being illegal”. In The Big Business of Europe’s Migration Crisis I wrote:

In the Saharan hinterlands, the citrus groves of Morocco, and the ghettos of northwest Africa’s cities, local, EU-subsidized police officers patrol a fluid borderland populated by a spectral threat. North and West African cops are often unable to distinguish Europe-bound migrants from local or regional businesspeople, religious pilgrims, traders, and the irregular workers who have traditionally moved quite freely throughout the region. As a result, authorities sometimes rely on the body language and the presumed intentions of those they hunt, creating a state of “being illegal” even in cases when in fact no crime has been committed, says Andersson.

“Illegal migrant…is pejorative, stigmatizing, and even incorrect, implying as it does that such travelers are criminals while they have usually only committed an administrative infraction, wrote Andersson. “The illegal migrant is conjured in increasing degrees of otherness, stigmatized by his very bodily presence.” By the time these migrants arrive on Europe’s shores or at the American border they’ve been treated as illegal so long that they’ve internalize the illegality, points out both Andersson and researcher Michael Agier, who says that “the border is now everywhere that an undesirable is identified.”

We tend to kick the biggest problems down the road and hope someone else will deal with them. Some we can only delay for so long. The migration crisis is just such an issue. Climate change is about to cause a refugee and international migration crisis that will be of an “unimaginable scale” say some of the West’s top military leaders. “Global warming is the greatest security threat of the 21st century and that mass migration will become the “new normal”. And it has already begun.

Making people “illegal” won’t solve any of these problems. And there is only so long you can contain people in sprawling camps, on wasteward islands or behind towers of razor wire.

In a globalized world we need a new and fair system for movement.

Follow Me:
Copyright © 2023 - Jim O'Donnell, All Rights Reserved.
Back To Top