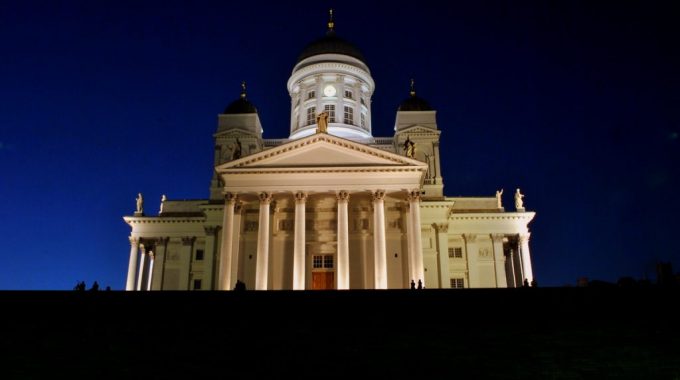 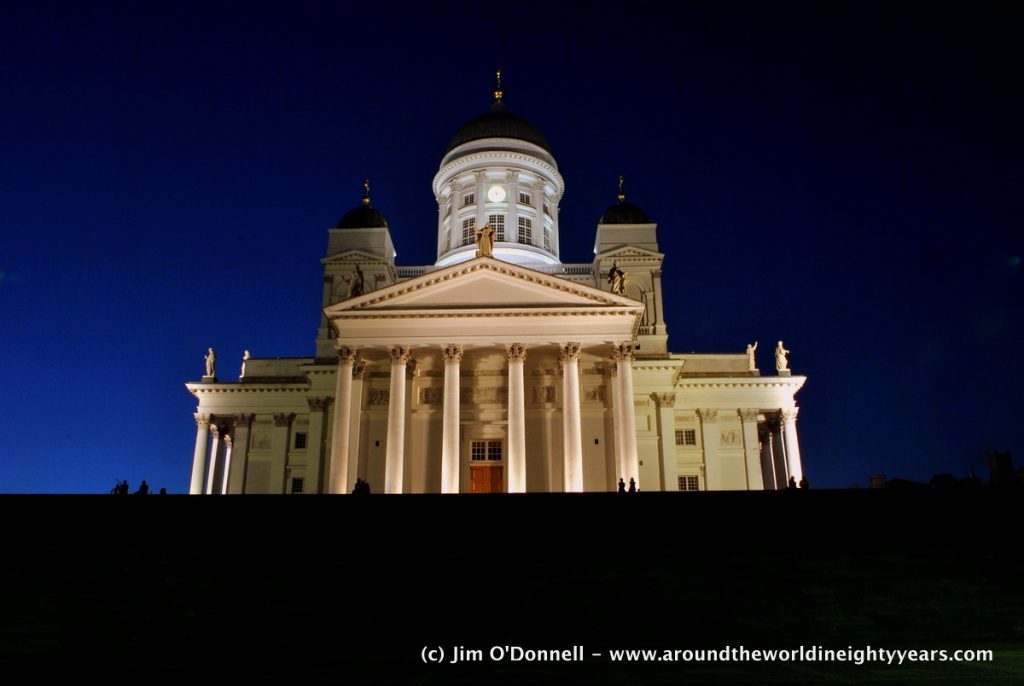 That is the Tuomiokirkko, the Helsinki Catherdral. While it is one of the most photographed buildings in all of Scandanavia, I’ve never been terribly impressed with it. I’m not sure why, I guess it is just that I’m not into Neoclassical architecture.

It was designed by Carl Ludvig Engel as the climax of his Senate Square layout: it is surrounded by other, smaller buildings designed by him. The church’s plan is a Greek cross (a square centre and four equilateral arms), symmetrical in each of the four cardinal directions, with each arm’s façade featuring a colonnade and pediment. Engel originally intended to place a further row of columns on the western end to mark the main entrance opposite the eastern altar, but this was never built.

One lovely May morning over ten years ago, I completed my entry-level Finnish language test and being that I passed I went to the outside cafe that sits next to the church.  That would be up there and to the left side in this photo.  I ordered a cinnamon pulla (like an oversized roll) and a cup of coffee to celebrate.  I took one sip and then a massive seagull swooped down from the rim of the cathedral, dumped a giant shit on the table and lifted my prized sweet roll up into the sky.  He dropped it a few feet away, dove down and again lifted it into the sky.  Then he was gone.

This is what you get when I get some hardcore jet-lag.  Can anyone explain to me why the jet-lag is so much worse COMING to Europe as opposed to going home?  I’ve noticed this suffering from the very first time I arrived on this continent in 1989. Actually, it is very hard not to notice.  It takes me several days to adjust each time and to be honest I’m somewhat of a mess until I do adjust.

Last night, just when I should have been crawling onto my mattress my body suddenly woke up. I’m staying with my good friend Rasmus Vuori and his eighty-three children in the Munkkiniemi section of Helsinki.  This is one of my preferred neighborhoods because it is near the water, the streets are lined with old pines and alders and limes.  The pikku bars are calm, the cafes well run and it only takes a few minutes to get back into the forest for a run or walk along a path that dips to and from the shoreline where terns hunt.

Ok.  So Rasmus doesn’t quite have eighty-three children but between he and his girlfriend there are plenty.  Ten perhaps?  They are hard to count in this huge sixth-floor flat because they never stop moving and meal time is more of a cafeteria-style rotation.

It’s my top choice for places to stay when I come. 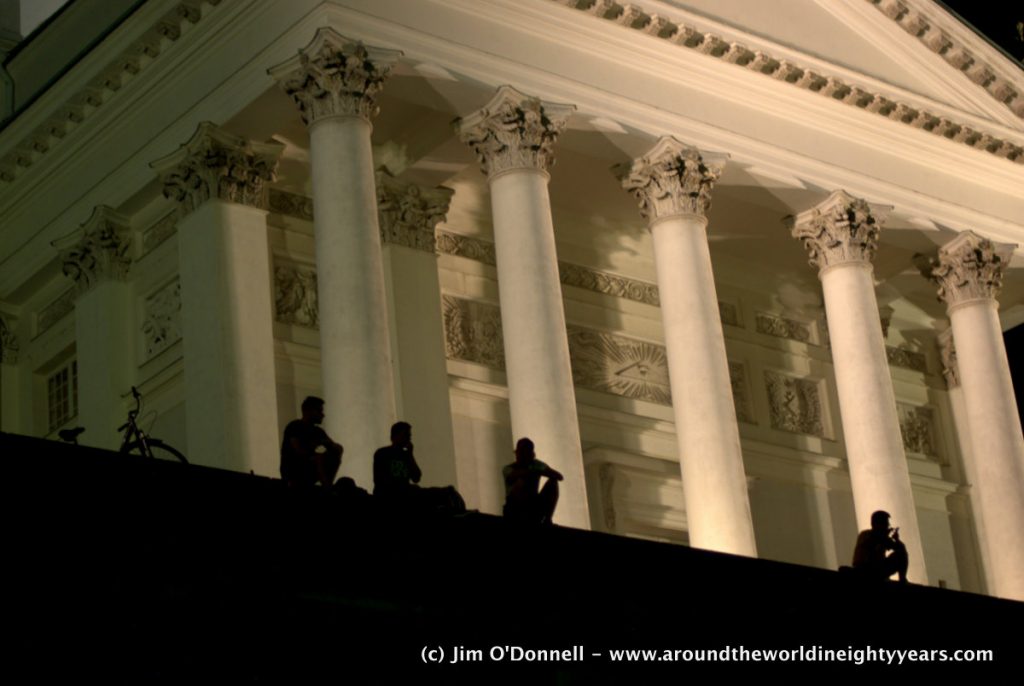 I took Tram 4 downtown around 10pm. My thought was really to go visit the old neighborhood where I lived from 2001-2004 but instead I ended up in Kruununhaka where the ferry runs to Suomenlinna.  I had a beer and then walked around snapping pictures somewhat thoughtlessly. Monday night tends to be a quiet one in Helsinki.  Only the small bands of tourists, the late shoppers on bikes, the students on the steps of the cathedrals and the ubiquitous Helsinki drunks were plowing about in the unusual heat.

Friday nights are when everything goes crazy in this city.  Saturday can be a wild one too but generally that is when the residents recover from the debauchery of Helsinki at night….the night before.  They must still be recovering on Monday. But the other reason that it is so quiet is that not quite everyone is back from the five weeks of paid vacation they get every year…..five weeks that to me prove the moral superiority of this society.  But that for another time….. 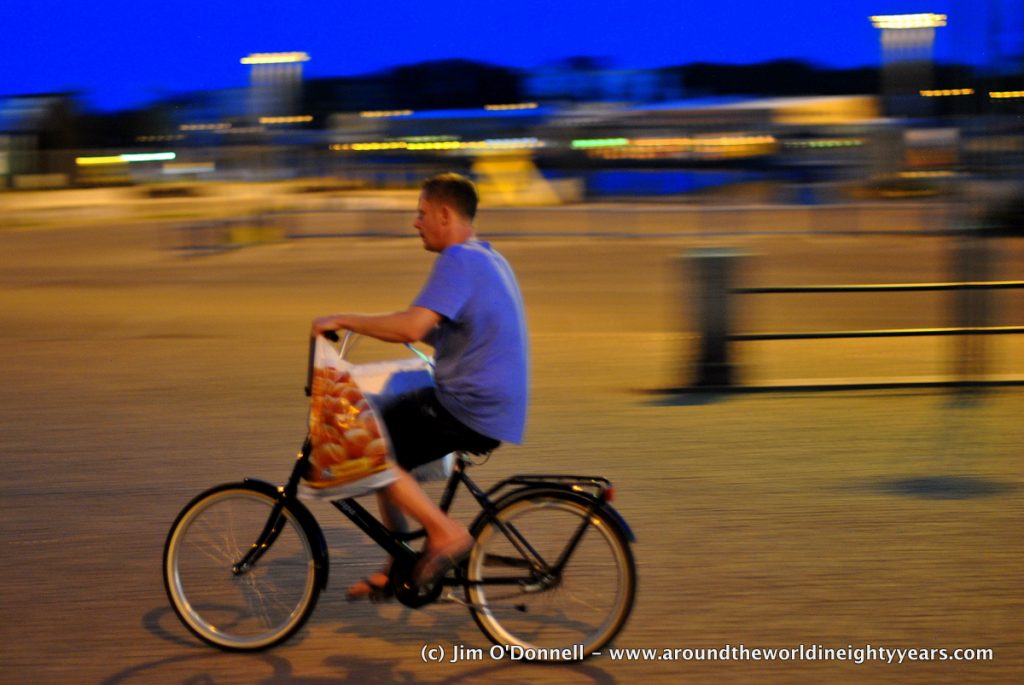 I hit the train station for some shots but it is shrouded in some papery construction wrap so I moved on to several of the statues I like and took some night shots of them.  Below the Mannerheim statue there are always groups of skateboarders.  They seem to be there forever, at anytime of the night or day and no matter the weather.  I watched them for a few minutes and moved on walking north. By the time I reached the Finnish Parliment buildings (below) I was dripping sweat and the tiredness returned.

I boarded Tram 4 for the 15 minute ride home, showered and fell into a deep sleep.  That unfortunately only lasted three hours……and then it was morning.

I’ll stay in Helsinki two more days, visiting with a number of friends, and then I will take the train to Vaasa and to my kiddos.  I can’t wait to see them.  It has been three weeks which is the longest I’ve been apart from them. I’ll stay with them in Vaasa for three days with them and then I’m off.  While I’m certainly looking forward to my adventures up in the Kvarken I am certainly not looking forward to those ten days without them.