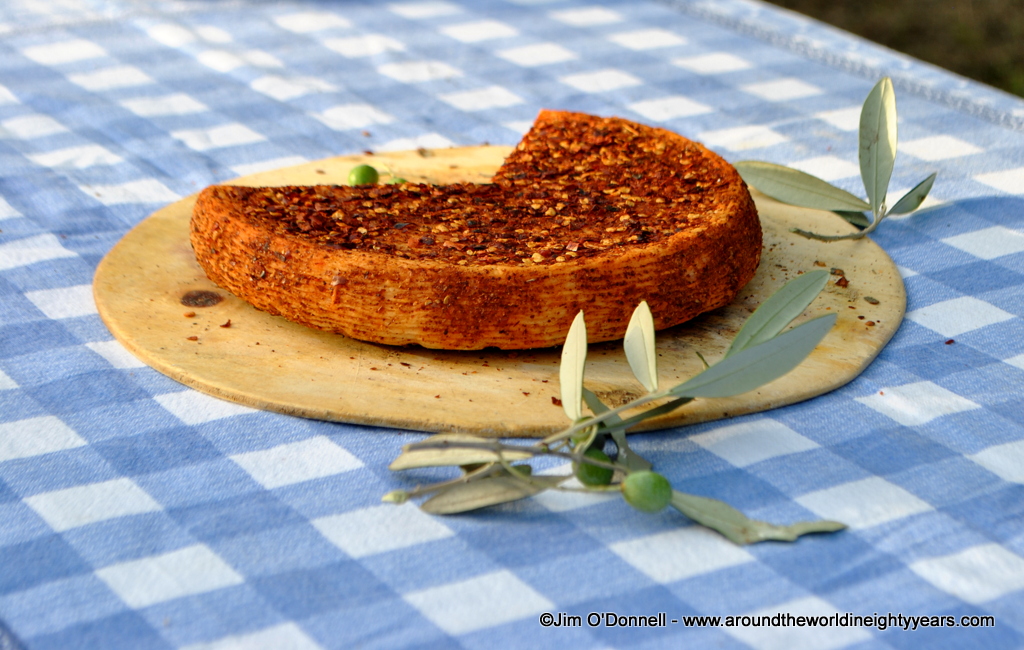 The cheesemaker Francesco Bagnoli lives with his parents and grandmother Lorena on the summit of an outrageously steep and pointy little Tuscan hill near Lamporecchio. The house seems cubist-inspired, all stacked both on top of and next to itself all at the same time.  Countless dogs, cats and chickens come and go from workshop doorways, collapsed barns, cars under repair and stacks of firewood. They all scattered when we arrived – except the friendly dogs and the one who just wanted to bark. They were all fat and healthy and shiny.

Bagnoli is an expert organic, artisanal cheesemaker operating with his brother under the name I Due Falcetti. He is also one of the most ridiculously handsome men I’ve ever met. It only took five minutes before the other DaVinci Storytellers – Leela, Karista and Kristina – had labled him “the cheese god”. I wondered if he had a sister.

The Bagnoli brothers make their sixteen types of cheese from the small herd of cows who saunter about on the fifteen hectare olive orchard and thirteen hectares of steeply forested hillside. Nothing about the place was big.  The slopes are covered in grasses , flowers, vines, brambles and a type of wild artichoke called arcardo mariana. They use no hormones or anti-biotics on their herd.

He invited us around to the back of the house to the orchard.

Out among the olives he had placed a long wooden table with a blue wax table covering. Across from that he unfolded a card table and placed a small gas stove on top along with several plastic strainers and a large plastic pan.  Then he taught us about cheese.  What it is, where is comes from and how to make it………. 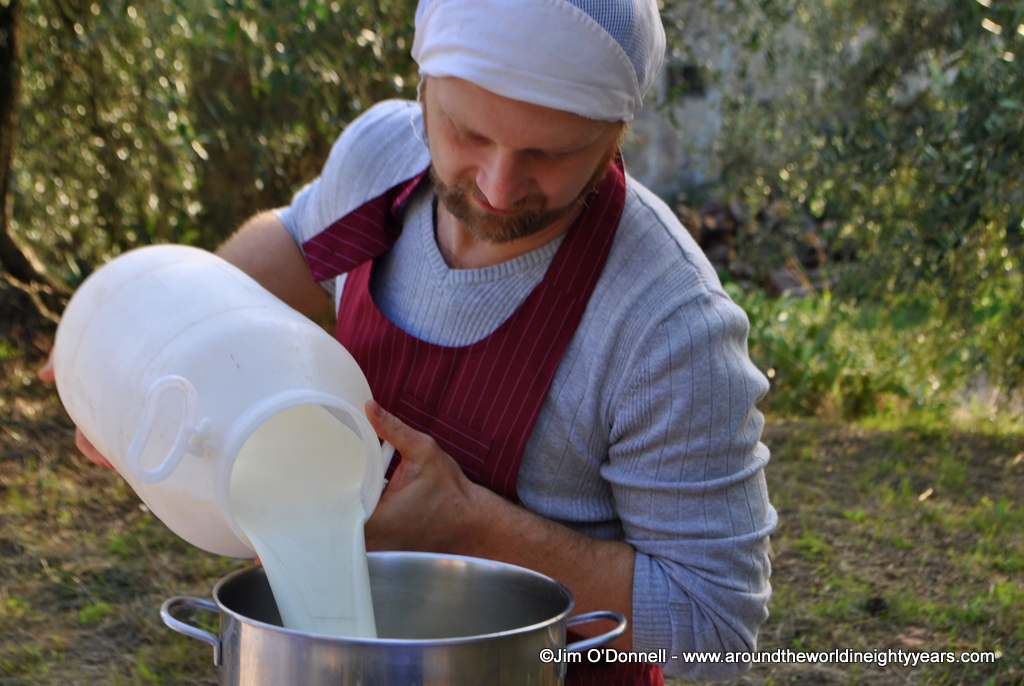 It takes one-hundred liters of milk to make forty grams of cheese according to Bangnoli. “This milk has the color of summer,” he said as he poured. “The color comes from the carotene in the grass here on the hill.” In the spring the milk held the sent of flowers because of what the cows were eating. One summer, he told us, the cows got into some type of berry and the milk turned pink. “The cheese we made from that milk turned out to be incredibly popular. That berry hasn’t come back since though,” he shrugged. 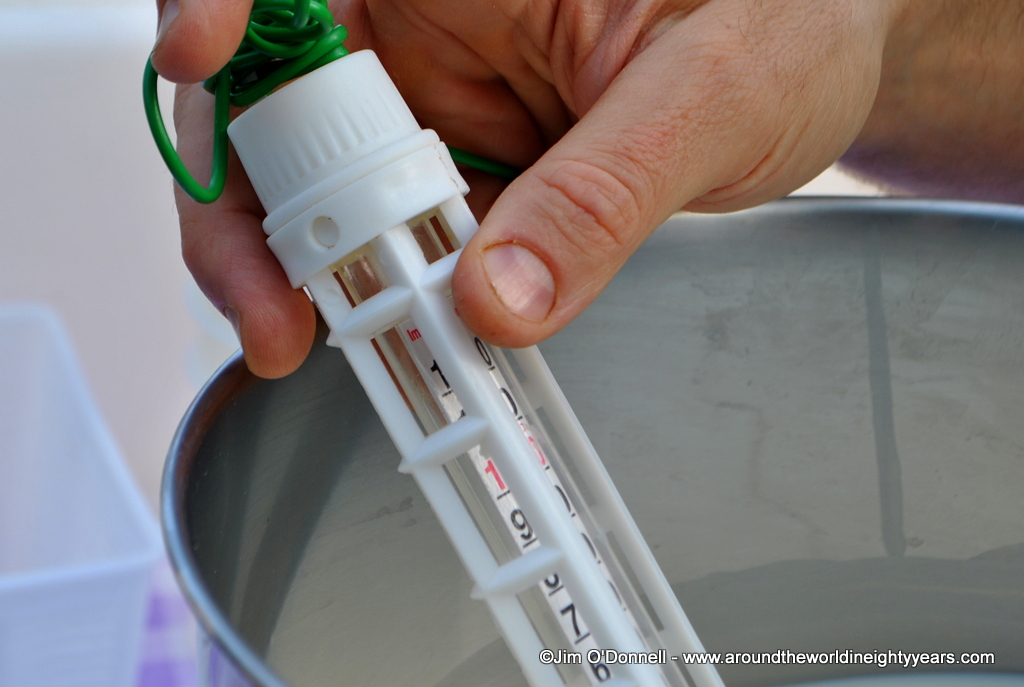 The milk is sterile for about fifteen minutes after it comes from the cow.  As he prepares this batch Bagnoli heats the milk back up to 37C, the same temperature as when it came from the cow.   He is very careful however to keep the temperature below 40C so that it can still be classified as a “raw cheese”. As it heats, the milk begins to solidify.  That is when Bagnoli adds the enzymes from the stomach of young cows under about six months of age who are still getting milk from their mother. The enzymes set right to work on the protiens in the milk, which kicks the cheesemaking into high gear. 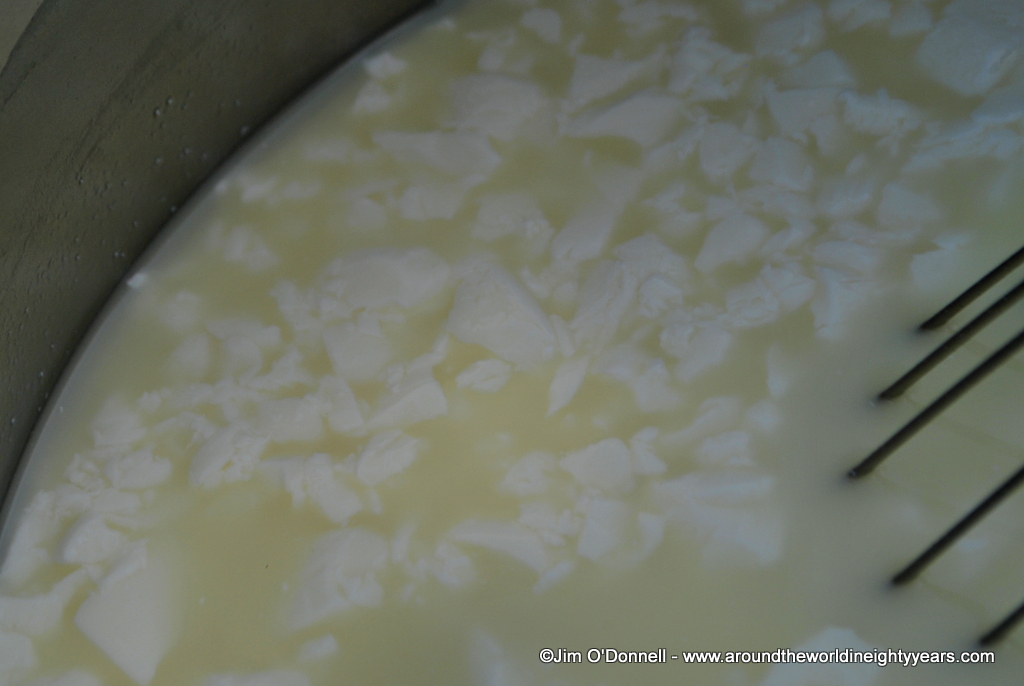 As the cheese solidifies it needs to be broken up into the right size chunks. The size of the pieces impacts the flavor so using the proper whisk size for the desired cheese is key. For fresh cheese, Bagnoli explaind, you want larger chunks.  For longer fermenting cheeses like parmesano you will need to chop the cheese into smaller pieces.

The strainer is likewise a vitally important tool as the size also matters for the type of cheese you are making. 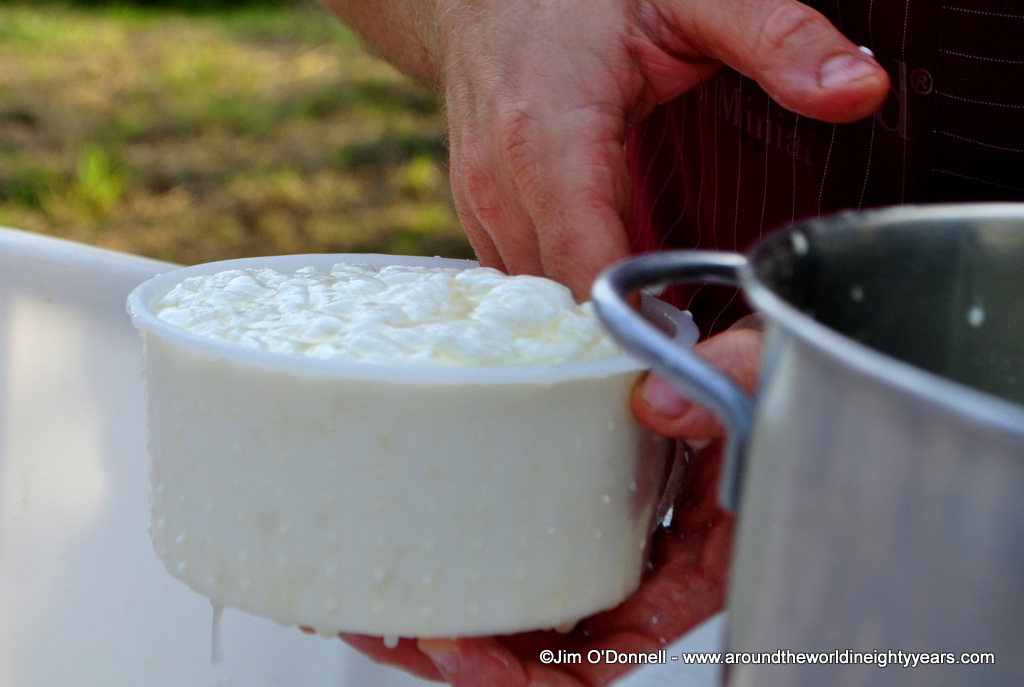 The cheesemaker explained a dizzying variety of methods for getting to different types of cheeses.  Whey is a vital ingredient of Ricotta cheese for example.  It must be heated to 90C and then infused with vinegar and salt. “Ricotta is not actually a cheese,” he explained. It is a “lettechino” because it is not solid. 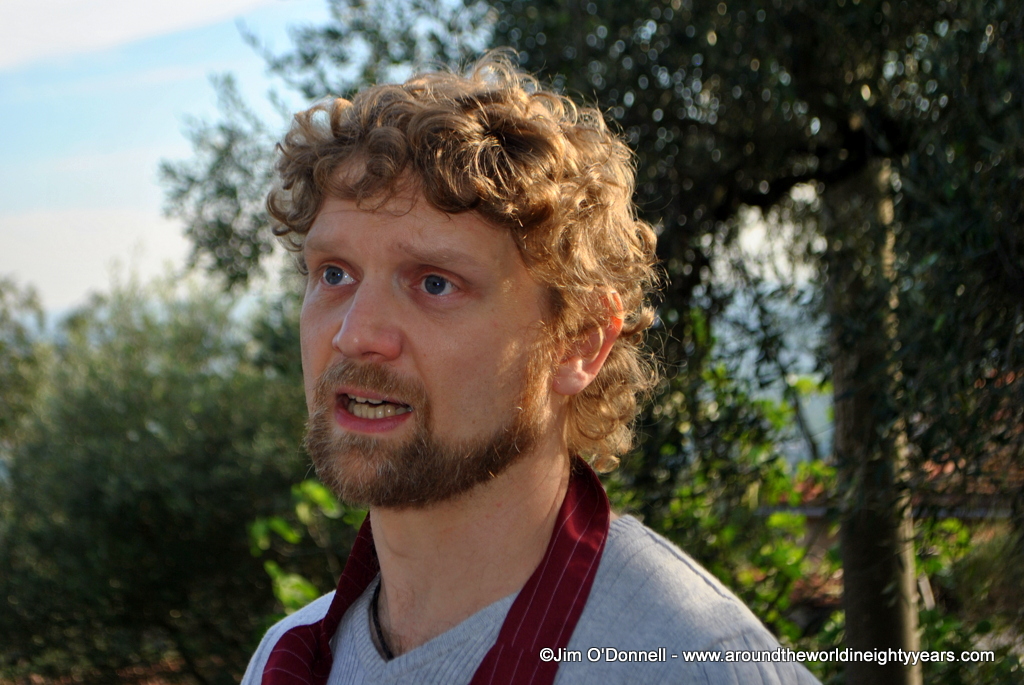 Bagnoli is a trained entomologist.  His focus was the fly that pollinates the olive tree. He started making cheese as a hobby. Just for fun.  Then it took off.  Today, I Due Falcetti operates in a similar manner to the Community Supported Agriculture (CSA) organizations in the United States.  It is a subscription type service known as spesa a kilometro zero, part of the increasingly popular move among many Italians to source as much of their food as possible from local farmers and artisans such as Bagnoli. One of his subscribers is a kindergarten in a nearby village.

“Our cheese is perfect for kids. It is high in protein and easy to digest,” he explained.  It is also very reasonably priced. 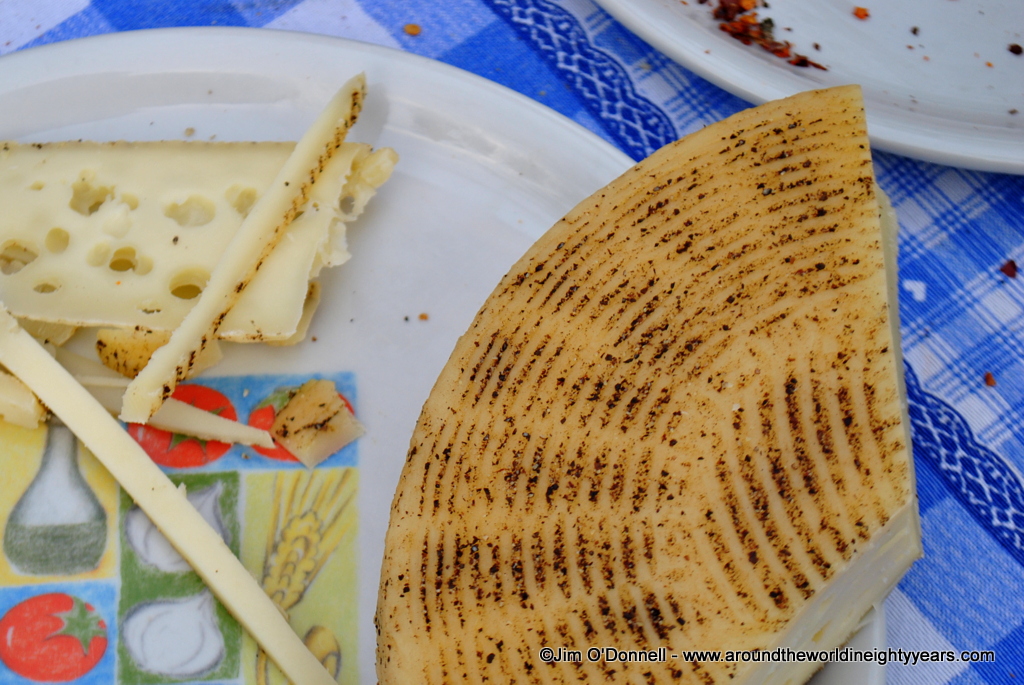 Light, creamy…just a subtle hint of that funk I love in cheese. This chunk was lightly coated in pepper for fifteen days only.  Just long enough to give it its own unique flavor. 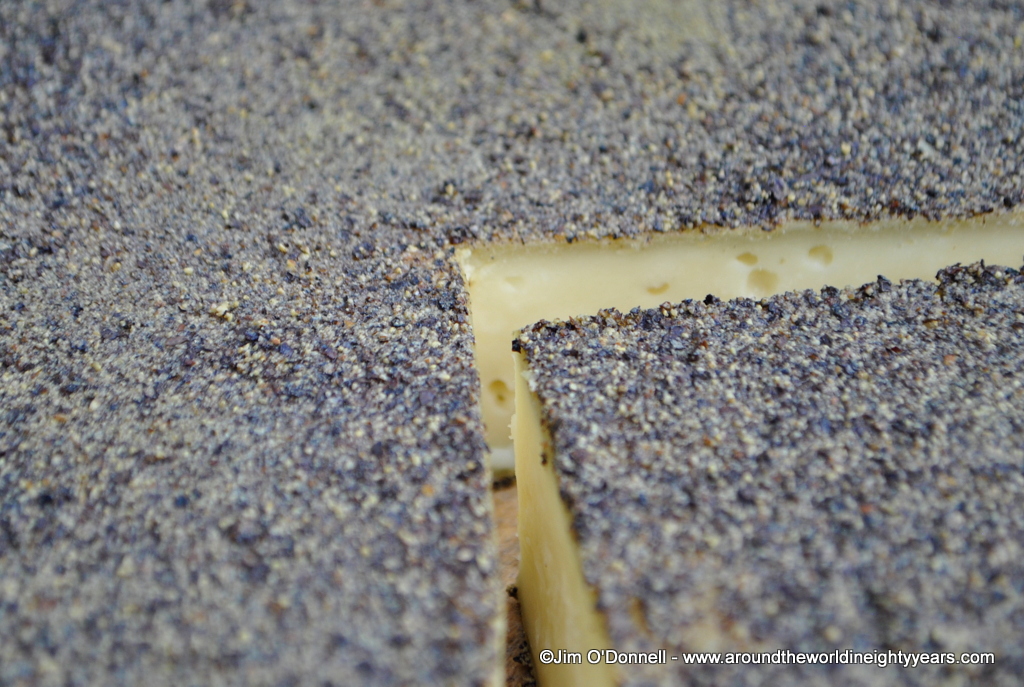 The velvty cacio in camicia Nero, coated in olive oil and pepper. The cheese inside is infused with the flavors of the pepper. It is only slightly spicy however and it is delicate. It doesn’t keep terribly long, only a month according to Bagnoli. 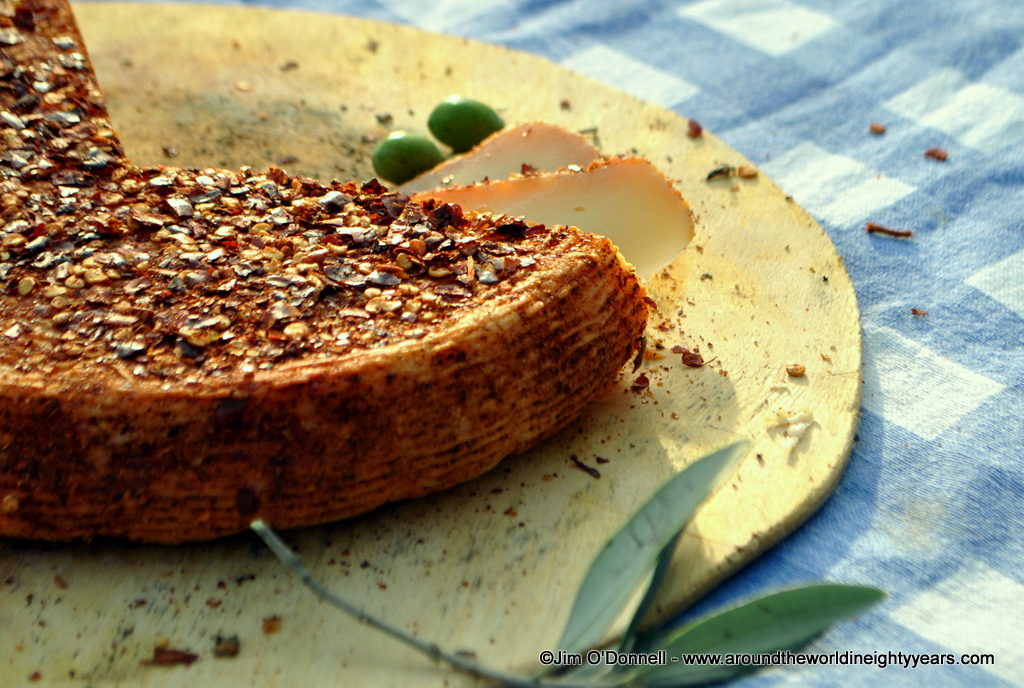 The cacio in camicia Rosso or ‘porcupine’ has more of a kick. Coated with olive oil from the farm then dressed in a spicy pepper grown in the garden, eating the Rosso was like sipping a wine. You have to move it all around your mouth to access the different flavors. At home, I found it went nicely with a little Grapa di Brunello.

The actual cheesemaking area is two simple, spotless little rooms at the bottom level of the house. There are a few large stainless steel pots, sterilized tools hanging nearby on the wall, a stove, a sink and great stack of different sized strainers. The backroom is the cellar where Bagnoli keeps his molds and other items for packing up the cheese.  He never has a large amount on hand as it goes out the door so rapidly. 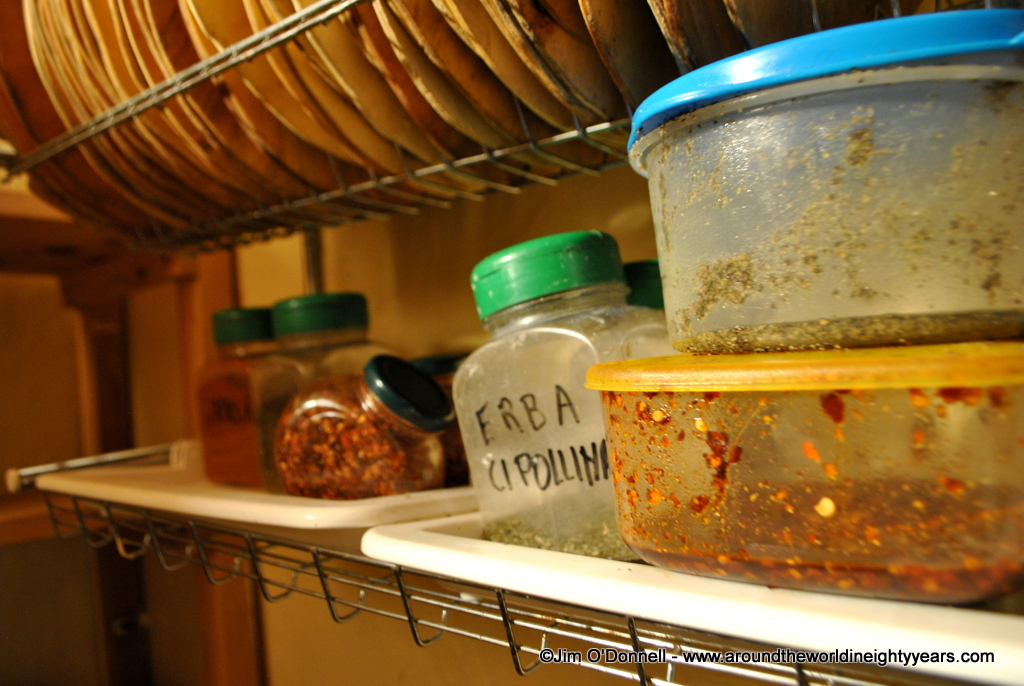 Bagnoli’s workspace is neat and organized.  Here are the spices he uses to flavor the cheese. The success of his cheese however comes straight from the land. Bagnoli points to the forest when asked why the cheeses are so wonderful. The Bagnoli land is more of a garden than a farm with the health of the soils and vegetation preeminent. Everything else comes from there. At dusk the cheesemaker vacuum-wrapped the two chunks of cheese I wanted and then grossly under-charged me.

I shared out several slices a week later with a neighbor who had lived in Tuscany as a child.  She laughed at first and poured out wine for each of us. When she placed the Nero on her tongue she actually cried. 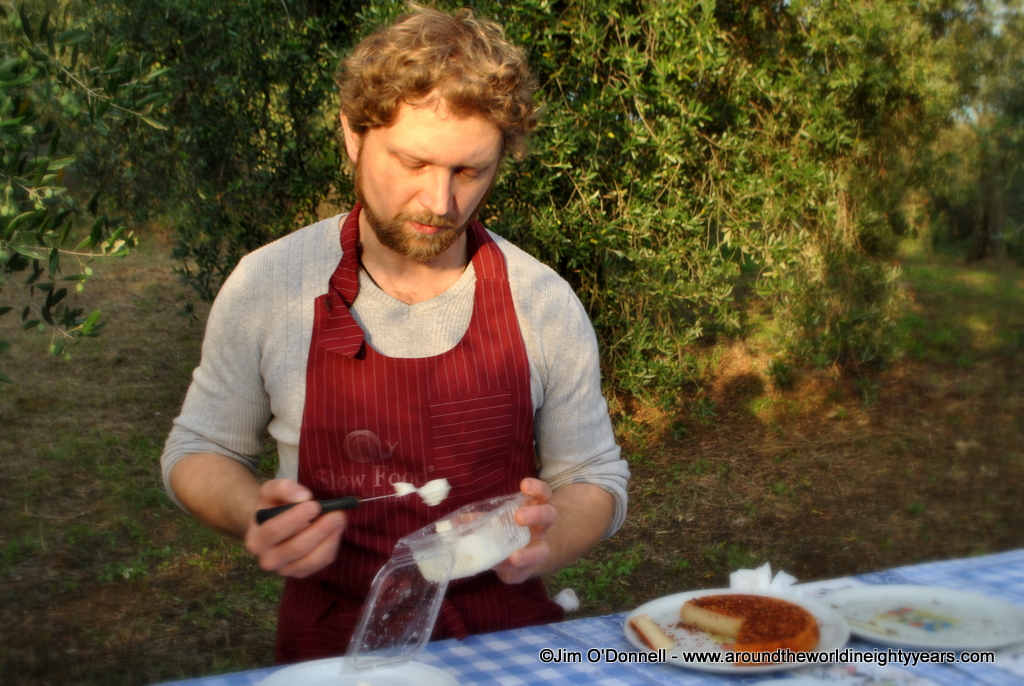